Captains in homemade vessels attend the Pirates of Camas Cove Regatta, featuring a race and other festivities.
CONTRIBUTED PHOTO/NANCY PARR

The homemade vessels are put together by mending together kayaks, canoes, paddle boards and more. Vessels are awarded prizes fitting into six different categories.

MOSES LAKE – Boaters dressed in pirate garb will take to the waters of Moses Lake this Sunday, dressed in theme for the 6th Annual Pirates of Camas Cove Regatta.

The regatta, hosted by Camas Cove Cellars, sees human-powered vessels decorated in pirate-themed decor for a fun day of races, music and more.

“We have a race, and people bring water cannons and so they shoot each other and race for different prizes,” Camas Cove Co-owner Nancy Parr said. “So, we have prizes for the events. And we have a lot of people come in boats, and they line the course. Last year we got almost 30 boaters out there and they all brought water cannons and they were shooting each other. It was really (fun).

Parr said the event began in 2001 with carved-out pumpkins being fixed with electric motors and taken to the water. Once Camas Cove Cellars put in vineyards the event dwindled down, later returning after Parr’s daughter Kathleen inspired a return.

“A bunch of guys got together and hollowed out giant pumpkins, put electric motors on,” Parr said. “And then after 2004 we planted our vineyard and at that point, we were busy with the vineyard so we didn't grow giant pumpkins anymore.”

In the six years since the regatta returned it has increased in attendance, Parr said.

“It's pretty exciting, you know, and I can say people look forward to it,” Parr said.

The regatta features a race for participants, separated by heats. Along with the race there are awards given out to honor boat decor and theme; best design fitting the pirate theme; the Jolly Roger award, given for extreme plundering; the Funniest Scallywags in the Cove award; the fastest vessel and the Titanic award, given to the most unseaworthy vessel. Prizes for these awards are $50 for the winners.

Other festivities during the regatta include music by The Seven C’s Pirate Band and food from Umapine Creamery and The Walking Waffle.

“We have the band and food and the race prizes,” Parr said. “People dress and act like pirates. People just come out and have fun.”

Entrants are encouraged to decorate their vessels to the theme and come dressed in pirate attire. Attendees can create their own floatable vessels, using things like paddle boards and surfboards to mend into a floatable boat. Personal flotation devices are required to be on the water, and captains must be over the age of 12 to register.

“Whatever they can float,” Parr said of what entrants typically bring. “You can have a boat, but you'd have to paddle it. So they decorate canoes, kayaks, paddle boards and blow-up rafts.”

“It’s people friendly, pirate friendly and it's been fun,” Parr said.”It's been funny, and just people want to have fun.” 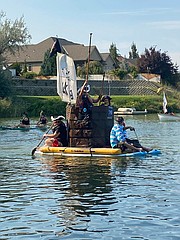 The homemade vessels are put together by mending together kayaks, canoes, paddle boards and more. Vessels are awarded prizes fitting into six different categories.