MOSES LAKE — On roughly 23.5 acres of what used to be sagebrush-covered scrubland north of Moses Lake, engineers with Stoke Space Technologies are working to build the future of spaceflight.

“Moses Lake is where we do our engine develop testing,” said Andy Lapsa, Stoke CEO and co-founder of the company with Tom Feldman. “We’ve started with our second-stage rocket engine. And, you know, as we need to grow our testing needs, we are hopeful that we can do that in Moses Lake as well.”

In addition to the New Shepard suborbital rocket, Blue Origin is working on its New Glenn launch vehicle, the company’s counterpart to SpaceX’s reusable first-stage-to-orbit Falcon 9 rocket. Making rocket stages reusable reduces the cost of sending things like satellites, people and Tesla Roadsters into orbit and then across the solar system.

Right now, most rockets that send things into Earth orbit are completely expendable. And even with SpaceX’s reusable Falcon 9 rocket, a single-use second stage is used to boost the satellite or spacecraft into orbit. When it’s done, it falls to Earth, mostly burning up in the atmosphere.

“There’s just a lot of both commercial and national security implications that require our country to take leadership and innovate,” Lapsa said. “The holy grail of rocketry and the place that the industry needs to get is 100% rapidly reusable rockets. I didn’t see that problem being attacked with the concentration that I think it deserves.”

So both Lapsa and Feldman left Blue Origin in 2019 and founded Stoke Space Technologies to work to solve that problem, to create a reusable second stage. And it has meant attempting to solve a whole host of problems relating to trying to get complex machinery to survive the blazing heat and stress of reentry through Earth’s atmosphere and land like a space capsule, Lapsa explained.

“The whole premise of the company is to figure that out, to make rapidly reusable second stages,” Lapsa said. “That’s the thing that has to be solved, and nobody’s done it yet.”

Lapsa was coy about the exact nature of the technologies Stoke is developing and testing in Moses Lake — it’s all proprietary. But he outlined the basic problems Stoke is working to solve involving vehicle materials, active cooling processes and an engine configuration that will survive reentry.

“What we came to was a solution that protects the vehicle using everyday ductile metallic heat shield surfaces,” he said. “We use our kind of novel approach to actively cool that surface. During the reentry phase of flight, we can tailor the surface temperature on the heat shield and keep it in a regime that’s adequately cooled to keep the vehicle protected.”

Part of rethinking the second stage means reconceiving how engines work, Lapsa said. Second stages right now usually sit atop the first stage, their engine — usually one — a long bell protruding behind the vehicle and protected during liftoff by a ring that drops off as the stages separate.

“The traditional upper stage bell nozzle, in order to be high performing, has to be relatively large,” he said. “And what that means is you have these very thin-walled bells that can be thought of as tin foil level of thinness. They just barely hold together, and that’s fine during the ascent, but during descent, you have to protect them. During re-entry, you have to make them robust to aerodynamic loading.”

The solution Stoke is working on involves much smaller engines clustered in a ring and all fed from one fuel and oxidizer pump. This will produce as much thrust as a single, larger engineer but will also be protected from the heat of reentry by being enclosed in the vehicle housing. In fact, Lapsa said Stoke has been testing that arrangement of more than a dozen smaller engines in a ring in Moses Lake and is looking at having a test vehicle it can launch on a very short flight — maybe 50 feet — to see how the entire concept actually works.

The other great challenge, Lapsa said, is creating a launch vehicle that is robust enough to survive re-entry and carry all the fuel it needs to maneuver on the way down, as well as all the equipment needed to land, while not being too heavy.

“Every single pound you put on a second stage since it goes all the way to orbit, that’s a direct, one-for-one pound that is not payload, that you could have otherwise used for payload,” he said. “The traditional logic in the industry was that you strip all of that away and make the minimum possible structure in order to deliver as much as possible into space.”

It’s an ambitious task, one that is keeping the company busy on both sides of the Cascade Mountains. Lapsa’s for rapid reuse is also an ambitious one, getting a launch vehicle ready for another use in 24 hours or less. No more months inspecting and replacing ceramic tiles, as was done on the space shuttle, or thin-walled stainless steel rockets that have to be kept pressured with gas before they are fueled to keep from collapsing, like the original Atlas missiles.

“You have to think hard about what you have to do between flights. And you just have to scope a lot of things that are traditional, for example, detailed inspections of engines or thermal protection systems,” he said. “You have to build a vehicle that’s robust to small flaws like ice strikes or bird strikes or mechanics dropping wrenches.”

“You have to trust this vehicle of the 50th and 60th and 70th flights,” Lapsa added. “You’ve got to design an architecture that’s really just bulletproof.”

Even though Stoke Space Technologies has just started out in Moses Lake, the company is already looking to expand and is seeking to lease another 120 acres from the Port of Moses for a more extensive testing facility. Despite just embarking on its project to build a reusable second stage, Stoke is also looking at creating its own reusable first stages — basically building the entire rocket.

“I think Seattle is a great hotbed for aerospace and manufacturing,” Lapsa said. “But obviously testing rocket engines does require some elbow room, and that’s hard to find on the West Side of the mountains.”

Lapsa said Moses Lake gives Stoke that elbow room, and he said the company’s relationship with the Port of Moses Lake has been a very natural pairing.

“As we expand the scope of what we’re doing, it does require more space. The hope is that we can continue to expand in Moses Lake.” 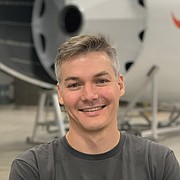