John Meeks breaks down a play with his team during a game. Meeks was named to his first college head coaching role at the age of 25.

“From the age of 19 I was put on the road, I was recruiting,” Big Bend Athletic Director John Meeks said of his coaching beginnings. “I was thrust into trying to coach the same guys that I had played with the year before and just a lot of learning on the fly.”

MOSES LAKE – John Meeks has spent more than 15 years as a basketball coach, and now, he’s taking his talents to another realm of college athletics.

Meeks was hired as the new athletic director at Big Bend Community College earlier this month and looks forward to making the switch from the coach of one team to overseeing a school as a whole. With coaching and recruiting being a position that demands time on the road, the 39-year-old Meeks said he missed spending time with his family - another factor that led to him wanting to make the leap toward athletic director.

“A significant portion of (the decision) was family as well,” Meeks said. “Being a college basketball coach, you're on the road a ton. You've got practices every weekend, and we just celebrated our six-year wedding anniversary, and we have two young ones as well. I just got tired of being away from my family.”

Meeks got his start in coaching at a young age, transitioning from a player at Bluefield College to an assistant coach and recruiter at the same school when he was 19.

“The story that I give is that I was blessed to be a bad basketball player,” Meeks jokingly said. “(Basketball) was a huge reason why I chose the school that I went to, but I chose that because I had the best opportunity to play and also to be on a really good team.”

Following a year on the team, a meeting with his coach led Meeks down a different path.

“After a year of being there, I realized that it was over my head - and I wasn't the kind of guy that needed playing time or whatever,” Meeks said. “But the head coach actually took me to - of all places - Hardee's, and said we feel like that you could be used kind of in a different way for our team. Kind of as like an assistant coach, student assistant.”

Meeks said that he knew that he wanted to help his team and that he wasn’t feeling like he was in his current position as a player. He accepted his coach’s offer and was on the road recruiting a week later.

“From the age of 19 I was put on the road, I was recruiting,” Meeks said. “I was thrust into trying to coach the same guys that I had played with the year before and just a lot of learning on the fly.”

After another coaching stop at Lee University, Meeks was named to his first head coaching position at Louisburg College when he was 25. After two years as head coach of the Hurricanes, Meeks was off to Wallace State Community College, a National Junior College Athletic Association school in Alabama. Along each stop in his coaching journey across the South, Meeks’ teams have posted overall winning records.

“At 25 I was actually a college head coach, so a much quicker trek so to speak than most people in the coaching profession,” Meeks said.

With beginning a coaching career in college basketball at a young age, Meeks believes that he can use the lessons he’s learned to assist Big Bend’s athletes for not just their time in sports, but for in the future as well.

“We want to be preparing young men and young women for life outside of athletics,” Meeks said. “The ball is going to cease to exist at some point. They're going to have to be prepared to be good husbands, good wives, good fathers, good mothers.”

The change from overseeing one program to multiple is something that Meeks looks forward to with his new role.

Meeks recalled a recent meeting with a coach, detailing how he looks to approach being an athletic director.

“One of (the coaches) said ‘I look forward to working for you,’ and I said ‘You're not working for me, we're working together,’” Meeks emphatically said. “So, kind of how I see this is I'm kind of in the trenches with them. I'm not the head coach of their program, and I'm not even an assistant, but I want to work in that way.”

As for goals as Big Bend’s athletic director, Meeks hopes to prepare athletes for the future and focus on academics. Athletes under Meeks at his previous coaching spots had a 93% graduation rate. 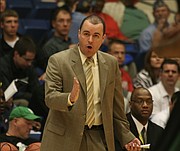 “From the age of 19 I was put on the road, I was recruiting,” Big Bend Athletic Director John Meeks said of his coaching beginnings. “I was thrust into trying to coach the same guys that I had played with the year before and just a lot of learning on the fly.”

John Meeks breaks down a play with his team during a game. Meeks was named to his first college head coaching role at the age of 25.