The Mattawa City Council will hold a public hearing to gather public reaction to a proposal to annex 40 acres, pictured at top left, into the city.
FILE IMAGE

Mattawa residents are being asked to give their opinions on a proposal to annex 40 acres into the city, pictured in beige in the upper left above.

MATTAWA — Mattawa residents are being invited to submit their opinions of the proposed annexation of 40 acres into the city limits. The public comment period on the application for annexation of the Brodero property opened Jan. 19 and will be open through Feb. 2.

A public hearing on the proposal is scheduled for the Feb. 2 Mattawa City Council meeting, which starts at 5:30 p.m.

The 40-acre area is adjacent to Priest Rapids Drive and Saddle Mountain Elementary School and is undeveloped. The annexation application was submitted by Drew Scott, owner of CAD Homes, Moses Lake.

The land is within the city’s existing urban growth boundary and would be zoned as residential if the annexation petition and development agreement are approved.

Scott has proposed developing about 27 acres in five phases, with about 20 homes per phase. There’s no plan yet for the development of the remaining 13 acres.

Whether or not to approve the annexation will be up to the council, and there’s been a debate among council members since the application was first submitted. The project predates a moratorium on annexation requests that the council imposed in July 2022.

That moratorium will remain in effect until an update is completed to the city’s comprehensive and capital facilities plans, and its housing action plan. All three are scheduled for completion in 2023.

The wide-ranging discussion covered housing density, both how many houses might be built per acre and whether or not duplexes could be allowed, the length of the agreement and the ultimate fate of the 13 acres. The discussion covered details ranging from parking to financial responsibility for street development.

During the annexation process, council members have expressed concern about the effect 100 new houses would have on traffic along Priest Rapids Drive. The ability of the city’s water system to accommodate the new housing also has been a cause of concern for some council members, as well as the impact of development on the city’s wastewater treatment system. 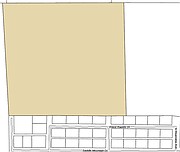 Mattawa residents are being asked to give their opinions on a proposal to annex 40 acres into the city, pictured in beige in the upper left above.