The dream lives on

About 30 marchers, led by Deandre Jones, left, and Glory Jones, make their way to the Moses Lake Civic Center Monday for the Martin Luther King J. Day celebration. By the end of the celebration, more than 100 area residents gathered for the event.
JOEL MARTIN/COLUMBIA BASIN HERALD

That was the point that more than one speaker made at the annual Martin Luther King Jr. celebration last Monday in Moses Lake. The event began with a march down Third Avenue to the Moses Lake Civic Center, and continued with songs, prayers and a reading of Martin Luther King Jr.’s famous “I Have A Dream” speech. That speech spoke of a day “when all of God's children, Black men and white men, Jews and Gentiles, Protestants and Catholics, will be able to join hands and sing.”

“That speech, if you read through it, we're currently in that day. As I was looking out at the crowd, it was a very diverse crowd. And I saw that as he was speaking it, he was seeing into the future. And so I was thinking, I was standing in the future, looking back at what he was seeing, and it was just a surreal type of thing,” said Isaac Jones, who delivered the gathering’s keynote speech.

While racism may not be completely wiped out, about 30 people of various races and ethnicities gathered in the parking lot of the Surf ‘n Slide Water Park to begin the rally. Rev. Plasido Lindsey, pastor at Galilee Baptist Church, addressed the walkers before they set out.

“Let us remember that Dr. King had a dream and what the march was all about,” Lindsey said. “The march was about freedom and equality for all men and women, and as I look around, I can see that his dream not only lives on but is gradually coming together. So I'm grateful today that we can do this as a community.”

A larger crowd gathered at the Civic Center as the marchers arrived. About 100 people chatted over doughnuts in the lobby before settling in for the celebration of King’s life and legacy. The festivities were emceed by Charlie Jones, president of the Moses Lake Martin Luther King Jr. Committee, and opened with the National Anthem sung by Lorena Serrato. This was followed by a prayer by Pastor Art Brown of Light of Larson Church.

Several songs followed, performed by George Richardson and Phillip Christian, Glory Jones and Rufina Tormozov. Zoe Chavez and Kassie Trautman, both 11 years old, read a passage from the book of 1 Corinthians: “Love suffers long and is kind; love does not envy; love does not parade itself, is not puffed up.”

Following the musical performances, Charlie Jones invited the winner of an essay contest on King’s life and legacy, fifth-grader Caitlin Carlson, to read her essay to the audience. Then Lindsey read the “I Have a Dream” speech and Isaac Jones delivered the keynote address. The ceremonies ended with a benediction, again delivered by Brown.

The word “love” figured strongly in many of the speeches and addresses.

“When Martin Luther King (Jr.) was speaking to the crowd, he was seeing the future,” Isaac Jones said after his speech. “But the crowd that he had was more minorities than it was Caucasians. But as I looked out there, it was salt and pepper. It was so rich. It wasn't just like a group here and a group there; it was everybody. It was just such a great turnout from the community and it was a great showing of what our community is. I love the community of Moses Lake. And that was a very good picture of what love is like.”

“I'm going to share with you two commandments that Jesus told us,” Charlie Jones said. “One, he says ‘Love the Lord your God with all your heart, with all of your soul and with all of your strength.’ That's the first commandment. And the second commandment is to love your neighbor as yourself. So if we do those things, we have no room for anything else but love.”

February is Black History Month in the United States. For more information on what that means, visit www.blackhistorymonth.gov. 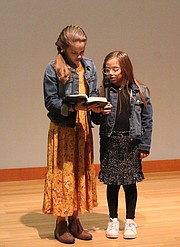