Body camera still of the arrest of Moses Lake resident Dustin Duville, 38, Saturday morning. Following his arrest, search warrants were issued for his vehicle, home and a storage locker which lead to the discovery of multiple illegal substances and items.
COURTESY PHOTO/MLPD

The half-pound of fentanyl – around 3,000 pills – seized by Moses Lake Police Department officers following the arrest of Dustin Duville on Saturday. Methamphetamine, powdered fentanyl and at least one reportedly stolen motorcycle were also found in the investigation.

MOSES LAKE — The arrest of a Moses Lake man Saturday morning resulted in the seizure of more than a half-pound of fentanyl pills as well as additional fentanyl powder and a half-pound of methamphetamine, according to a statement from the MLPD.

“It’s a huge deal. Fentanyl is running rampant not just in Moses Lake, but in the entire state,” said Police Chief Kevin Fuhr. “Three thousand pills for us is a good haul.”

Dustin Duville, 38, of Moses Lake, was stopped on I-90 near Moses Lake as part of an ongoing investigation into fentanyl sales in that city, the statement said. After his car was impounded, a search warrant for the vehicle was obtained that resulted in the discovery of roughly 3,000 fentanyl pills, four ounces of powdered fentanyl and eight ounces of methamphetamine.

Duville has been booked into the Grant County jail on drug charges, with charges involving firearms and possession of stolen property expected to follow, the MLPD statement said.

The MLPD statement said police then obtained a warrant to search Duville’s residence and a storage space, and discovered two illegally possessed firearms, a stolen motorcycle, and a second motorcycle with the vehicle identification number removed.

Fuhr said MLPD has been investigating the suspect for some time and described him as buying drugs from Western Washington to distribute in Moses Lake. The chief added that the bust also follows the seizure of 7,000 fentanyl pills as well as one and a half pounds of heroin and four pounds of cocaine in early December.

“Narcotics are flowing freely, not just in Grant County, but in our state,” Fuhr said. 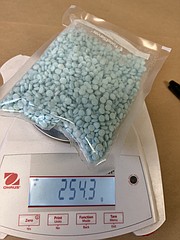 The half-pound of fentanyl – around 3,000 pills – seized by Moses Lake Police Department officers following the arrest of Dustin Duville on Saturday. Methamphetamine, powdered fentanyl and at least one reportedly stolen motorcycle were also found in the investigation.