Apples fill a branch in an orchard near Royal City. At the start of 2023, domestic apple sales remain strong, but the export market does have challenges ahead.
CHERYL SCHWEIZER/COLUMBIA BASIN HERALD

Apple blossoms in various stages of maturity, from bud to petal fall, fill an orchard near Mattawa. The domestic market for the 2022 apple crop has been relatively strong.

Retaliatory tariffs and congestion at U.S. ports have scrambled the export market for Washington fruit growers, including apple growers. Pictured, apples ready for harvest in a Royal City-area orchard.

QUINCY — Washington apple growers, having survived a wild and crazy 2022, are making the turn into a new year with a market that’s looking pretty good domestically, but facing some export challenges.

Riley Bushue, director of Congressional relations and export programs for the Northwest Horticultural Council, cited Washington apple sales to India as an example of the export issues.

“In India, we face retaliatory tariffs on apples,” he said. “Those were put in place by India in 2018 in response to the U.S. putting in place steel and aluminum Section 232 tariffs.”

Section 232 of the Trade Expansion act provides the President of the U.S. with the power to adjust imports, including with the use of tariffs, if foreign imports are found to be a threat to national security. Then-President Donald Trump utilized that power in March of 2018 to establish a 25% tariff on steel and aluminum from most nations with the exceptions of Canada and Mexico, according to the U.S. Bureau of Industry and Security.

Bushue estimated Washington growers sold about $120 million worth of apples to India in 2017-18 before the tariffs were imposed. He estimated 2022 sales at about $3 million.

“That’s in large part due to those tariffs,” he said.

“We have a similar situation happening in China, where we have retaliatory tariffs as well,” he said. “Combined, between India and China, those have cost our industry over the last four years - a few more than four years now - over $800 million. So that’s a huge challenge that we’re working through.

“At the end of the day, we need to bring an end to this retaliation. Those are two important markets - just on a pure population basis, the two largest countries in the world. And we’re obviously conveniently located on the Pacific to serve those countries,” Bushue said.

The entire Washington delegation to the U.S. Congress sent a letter to Secretary of Commerce Gina Raimondo and U.S. trade officials, requesting that apple tariffs be on the agenda when U.S. trade representatives met with their Indian counterparts at a scheduled Trade Policy Forum in mid-January.

“The tree fruit industry has suffered significant losses due to India’s retaliation for U.S. Section 232 tariffs,” the letter said. “On average, 30% of the apples, pears and cherries produced in the Pacific Northwest are exported and India was once a strong market. With retaliatory tariffs in place, Washington state apple growers have continuously lost market share in India.”

The export troubles, however, don’t stop there.

“The last few years there have also been a lot of challenges with ocean shipping - congestion in the ports, and while that’s improved, it can still be a challenge,” Bushue said.

Tim Kovis, director of communications and events for the Washington State Tree Fruit Association, said the news is better on the domestic market.

“Obviously, the advantage that Mexico and Canada have is that they’re land transport,” he said. “They’ve always been important markets, but that’s certainly been an advantage the last few years.” 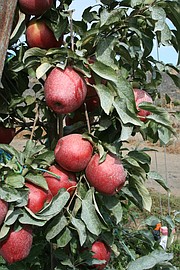 Retaliatory tariffs and congestion at U.S. ports have scrambled the export market for Washington fruit growers, including apple growers. Pictured, apples ready for harvest in a Royal City-area orchard.

Apple blossoms in various stages of maturity, from bud to petal fall, fill an orchard near Mattawa. The domestic market for the 2022 apple crop has been relatively strong.