Moses Lake’s Maite Betes looks to get past a Davis defender late in the match on Tuesday.

Moses Lake captain Anna Ribellia shoots at the Davis net during the Mavericks’ 3-0 win on Tuesday.

MOSES LAKE — First-year Moses Lake girls soccer Head Coach Alysha Overland has put an emphasis on team bonding for the 2022 Mavericks, and the results are beginning to show on the field.

“I knew I wanted to coach wherever I ended up,” Overland said. “Thankfully I ended up back here in town, and then got a position as one of the assistants my first year back. I worked my way in, and once Liz (Bigger) left and the position opened up I said ‘Hey, that’s what I want to do,’ and I knew I had a passion for it.”

“I grew up here in Moses Lake, I was born and raised here,” Overland said. “I played soccer my entire life, went through the program here as a Chief when (the mascot) was still Chiefs.”

One of the main concepts that Overland hopes to see from the team is high levels of team chemistry, which the Mavericks have generated through a variety of ways – including wearing “spirit paint” while on the field.

“Typically we do the gold and maroon – it really amps up the team,” Moses Lake senior Anna Ribellia said. “It’s just kind of a team bonding thing to get everybody pumped up for the game, helps us play better.”

Overland said the paint is something she did while she played at Moses Lake, and that “it gets the girls going and excited, it brings the energy.”

“I’m huge on team chemistry on and off the field,” Overland said. “I really believe that off-the-field chemistry translates on the field, and you can see it when they start meshing together.”

The Mavericks earned their fourth win of the season on Tuesday night, evening their record at 4-4 with a 3-0 win over Davis.

“It feels great,” Overland said of Tuesday’s win. “The girls needed it; we all needed it as a team. It’s really bringing our momentum up and our morale as a team altogether. Now we just gotta carry that energy on to Saturday.”

Ribellia opened the scoring in the 10th minute on a goal assisted by a right cross from teammate Sam Escamilla. Moses Lake recorded nine shots on goal in the first half and 19 throughout the game.

“I just tried to stay open for the pass that I saw coming, and I had to cross it across my body to fake the keeper,” Ribellia said of her first-half goal. “Just aim for the corners.”

“We definitely talked at halftime about how they’ve been playing so we can amp it up to counterattack and shut down their plays that they practice,” Ribellia said.

Moses Lake is back in action on Saturday for a road game against Wenatchee, beginning at 1 p.m.

Moses Lake captain Anna Ribellia shoots at the Davis net during the Mavericks’ 3-0 win on Tuesday.

Moses Lake’s Maite Betes looks to get past a Davis defender late in the match on Tuesday. 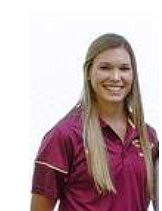