David Kenney said he’s always had an interest in lifting heavy, and how he applies that to his first powerlifting this weekend in Spokane.

SOAP LAKE – 64-year-old David Kenney spent years as a Special Olympics bowler and earning numerous medals in the process. Now, Kenney will head to Spokane this weekend for his first powerlifting competition.

“I’d done bowling, and I’ve got every single medal they have,” Kenney said while pointing to the various Special Olympic medals around his neck. “And I’ve also been training at Anytime Fitness in Ephrata with my trainer”

Kenney recalled a story from back when he lived in Maine, where his mother had come back into the house and heavier items in the kitchen had been moved. He said he’s always had a fascination with lifting and moving heavy items, something that continues to this day.

“When I was younger, back in Maine, I was really interested in lifting heavy things,” Kenney said.

Kenney moved to the Basin in 2015, and began in the Special Olympic bowling program in 2018. Since then he’s won eight medals, with six of those being gold. He’s spent much of his time in the gym since moving to the Basin, doing “all kinds of stuff” that he can.

“Before I came out here, I weighed close to 300 pounds,” Kenney said. “And my doctor back East said if I kept it up, I would not be around in 10 years. So I’m doing all kinds of stuff that I can do.”

The progress that Kenney has made in the gym has shown, saying that he’s dropped weight closer to 210 pounds.

His trainer, Holli Bosnar, has even given Kenney a new moniker to go by.

“At the gym, they call me ‘The Beast from the East,’” Kenney said. “Because I came from Maine, and I’m working so hard at the gym that I’m like a beast.”

Now as Kenney the Soap Lake native prepares for his first powerlifting competition, he looks forward to beginning a new experience in athletics.

“Part of me is excited for doing it, but the other part is a little bit scared because I don’t know what I’m going to expect the first time around,” Kenney said.

While nerves can be overwhelming, Kenney has a solid backing of family in the area that support him in his endeavors. He said that those in attendance plan to wear shirts with his Beast from the East name on them.

“My sister and brother-in-law have been really good supporters of mine through things, and when I have bowling tournaments they’re always there, along with my nephews and their wives,” Kenney said.

“In the Polar Plunge I did at Crescent Bar, I raised over $1,400 dollars for Special Olympics,” Kenney said.

Kenney said that he takes advice from a close friend who recently passed away, whose last words to him were to “do your best.”

“Concentrate and do my best,” Kenney said of what he can take from bowling and apply to his first powerlifting competition.

The USA Powerlifting meet will be held at Forward Fitness in Spokane on Saturday, and Kenney said that he will be lifting at 11:30 a.m.

Kenney finished by calling for an increase in the number of Special Olympics events here in the Basin, and even the meet in Spokane is the first event “in a long time.”

CORRECTION: Kenney will be competing in a USA Powerlifting event. The correction has been appended above. 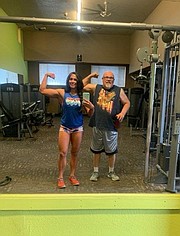 David Kenney said he’s always had an interest in lifting heavy, and how he applies that to his first powerlifting this weekend in Spokane.