Kellan Roellich follows through off the tee at the Samaritan Foundation Desert Golf Classic.

Nic Vela at the top of the backswing while teeing off at the ninth hole at the Samaritan Foundation Desert Golf Classic.

MOSES LAKE — The fundraising golf tournament sponsored by the Samaritan Healthcare Foundation drew a full field of 32 teams to The Links at Moses Pointe Thursday.

Proceeds from the 21st Desert Golf Classic will go toward the “Build Community” project, the construction of a new Samaritan Hospital.

“We are going ahead with that hospital,” said foundation board member Susan Carbon, who’s also a hospital district commissioner.

Construction of the new hospital has been delayed while district officials work to address a funding shortfall, the result of steep increases in construction costs.

Golfers came from all over Washington for a day on the links, drawn by sunny weather and a good cause. That’s what drew Ryan Pettibone of Spokane.

“Here to play golf and support Samaritan,” he said. “And take a day off work.”

Greg Twombly, Wenatchee, played with a team from Washington Mutual, one of the sponsors. Temperatures were in the 70s, the sun was out, and skies were relatively free of wildfire smoke.

“This is just a beautiful course. It’s just fun to play over here,” Twombly said.

“We just came over for a day of golf and support a great cause,” said Justin Anderson of Bothell. “It’s just so pretty on the east side.”

“It’s a fun day of work,” said Kellen Roellich as he prepared to tee off on the ninth hole.

Roellich said he believes it’s important to support local organizations like the Samaritan Foundation; he’s on the board at the Boys and Girls Clubs of the Columbia Basin.

“Being philanthropic is just part of it,” he said.

Roellich and his teammates have played together for a long time; they were trading jokes back and forth as they lined up at the tee.

Tournament winners, and the amount of money raised, were not available at press time. For some of the golfers it wasn’t so much about winning as a good day of golf.

Nic Vela at the top of the backswing while teeing off at the ninth hole at the Samaritan Foundation Desert Golf Classic. 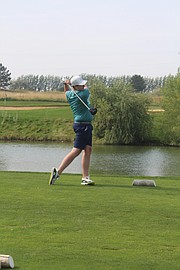 Kellan Roellich follows through off the tee at the Samaritan Foundation Desert Golf Classic.