“The course was really hilly,” Head Coach Larry Dagnon said. “There were a lot of climbs, a lot of benches. Some longer downhills, but those downhills didn’t make up for the climbs.”

The Maverick girls placed fifth out of 15 teams and the boys placed eighth out of 16 teams.

“It was really cool to see what work they’ve put into it all these years,” Dagnon said.

The trip, which lasted from Sept. 7-11, returned for the Moses Lake cross country teams after years off due to the pandemic. Along with the cross country meet, the teams hiked at Diamond Head and Manoa Falls, and visited Pearl Harbor as sightseeing opportunities while in the U.S.'s 50th state. Some runners took the time to visit the beach and go snorkeling, and the team bonded together throughout the trip.

“My favorite part of the trip was probably just connecting more with the team,” senior Ethan LaBonte said. “All the stuff we did helped us grow closer together, but the downtime was really fun too.”

“I just really enjoyed being able to experience such cool places and make some fun memories with the team, which I do consider family,” Holterhoff said. “It was awesome to just be able to hang out with each other 24/7.”

“You have to have confidence in yourself and in your body that you can keep pushing further than you ever thought you could,” Scheel said.

The Mavericks posted the shortest time gap between first and last runners during the girls meet, with an interval of one minute and 20 seconds.

“It was pretty amazing just because you’re sitting there with some of these great teams, and you’re not too far from them,” Dagnon said. “We definitely belonged there with them. It kind of gave our kids a little bit of a shot in the arm like, ‘Hey, you know what? Maybe great things are about to happen coming off this performance.’”

“It’s mostly all mental,” Verduzco said of what he learned from the meet. “If you don’t have a mental (aspect) you’re not there.”

A significant impact made by the trip on the Maverick teams was the opportunity to grow with one another both as runners and as teammates.

“Just hanging out with the team no matter what we were doing,” Feller said of what she enjoyed most on the trip. “If we were racing, if we were hanging out on the beach – even just eating breakfast. This is such a good team, and I just love everyone.”

Along with the varsity competitions, a 5,000-meter open race was held for the boys and girls teams as well. Moses Lake had nine boys runners and seven girls runners compete in the open. Their times will be posted below. 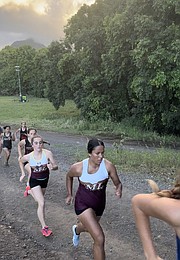