Ephrata takes Battle of the Basin

Quincy and Ephrata faced off in the Battle of the Basin Friday night.
Rebecca Pettingill/Columbia Basin Herald

The Battle of the Basin saw Ephrata walk away with the trophy after taking the game 28-0.

QUINCY — The annual Battle of the Basin football matchup between Quincy High School and Ephrata High School was fought Friday night in Quincy. The Ephrata Tigers came out on top, keeping the trophy another year until the battle will be fought again.

“I think early on we came out running the ball and doing what the game plan was,” said Ephrata Head Coach Patrick Mitchell.

Last year Ephrata took the trophy with a 33-0 victory over the Quincy Jackrabbits.

This year, the Tigers brought the heat again, and were able to score in the first two minutes of the game when senior Travis Hendrick had a 22 yard touchdown run.

The Jacks and Tigers continued to push each other back, keeping the other out of the end zone for the rest of the quarter.

Coming into the second quarter the Tigers again brought the heat, cinching two more touchdowns, the first by Hudson Sager and the second by Hendrick.

Coming out of the half, the Tigers and Jacks seemed to have renewed energy. The third quarter went by with neither team seeing the end zone.

Seven minutes were left in the fourth quarter but Ephrata wasn’t done scoring. A field goal attempt by Quincy was blocked by Ephrata’s Weslee Kriete, with the ball picked up and returned for a touchdown by teammate Josh Green.

In the final minutes of the game, Quincy nearly got on the board but the touchdown pass failed.

Ephrata took the game, and the trophy, with a final score of 28-0.

Quincy Head Coach Russ Elliott said he wasn’t happy with the team’s energy in the first half but felt it picked up in the second half.

He noted that they put together some drives and runs but couldn’t quite finish them.

“I thought we would be able to compete a little bit more (than we did),” Elliott said.

Elliott said his players are working hard and making improvements, and that it’s going to take time to change the culture.

“I feel we’re headed in the right direction,” said Elliott.

Travis Hendrix had 10 rushes for 102 yards and two rushing touchdowns.

Hudson Sager had seven rushes for 26 yards and one rushing touchdown.

Josh Green had three rushes for 36 yards and one interception.

Seth Jones and Wes Kriete each had one quarterback sack.

The Jacks finished with 216 yards of total offense. 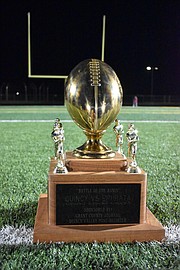 The Battle of the Basin saw Ephrata walk away with the trophy after taking the game 28-0.