Othello receiver Adriel Deleon (5) stiff-arms an Enumclaw defender in the Huskies’ 20-17 loss to the Hornets on Saturday.
COURTESY PHOTO/KEVIN HANSON

Junior running back Alex Mendez races by an Enumclaw defender on Saturday.

ENUMCLAW – The No. 5 seed Othello Huskies traveled to Washington’s west side for a state quarterfinals matchup against Enumclaw, with the Hornets eventually prevailing in a physical, 20-17 win.

“It was pretty intense,” Othello Defensive Coordinator Kevin Hale said. “State quarterfinal matchup, the weather was absolutely beautiful – about 50 degrees at game time. The support from the Othello community, our stands were completely full. It was a real intense environment.”

Senior running back Julian Alegria found the end zone early in the game, and a field goal by senior Brandon Garza gave Othello its first nine points of the afternoon. Still, Enumclaw’s high-powered offense kept them in the game against a stout Othello defense.

With the Hornets up 13-9 and facing a fourth-and-two in the fourth quarter, Enumclaw was able to convert and score a touchdown to go up 20-9 late in the game.

“That was a pretty big moment, to say the least,” Hale said.

Othello was able to reach the end zone again on a touchdown reception by Alegria, but the ensuing onside kick fell into the arms of the Hornets who ran out the clock to win the game.

“It was the old analogy of a heavyweight boxing match,” Hale said. “Both teams just went at each other, and the end showed that they were evenly matched and it was a hard-hitting game. In the end, we came up a bit short.”

Fans made the nearly three-and-a-half-hour trip to Enumclaw for the game, packing the stands to support their hometown Huskies.

“It’s always meaningful, whether it’s at home or away, to see the people in the stands,” Hale said. “The crowd, that’s always a pick-me-up for the boys.”

Othello won a state playoff game last week for the first time since 2012 but fell short of advancing to its first state semifinals since 2007. Now, the Huskies will use the experiences from this year to prepare for the future.

“We have the experience now, we know what it takes,” Hale said. “There’s a blueprint to follow. In any areas where we may be deficient in, we need to work to correct them, whether it’s physically (being) ready, or coaches finding some more things that we can do to put the kids in better positions to be successful.”

Hale said that the Othello coaching staff is “incredibly proud” of the achievements that the Huskies’ senior class made during their time on the field.

“They were undefeated as freshmen, and of course sophomore year COVID got that taken away. Last year (they) made it to the state playoffs and this year to the quarterfinals,” Hale said. “There’s something different, not just their athleticism, but their mental makeup. The way they approach the game, their toughness. These guys didn’t make it this far just because they’re athletically gifted.”

A trip to the quarterfinals also sends a message to future Othello athletes as well, Hale added.

“Certainly, one of the biggest things that this (season) does is gives the younger kids in our community that are going to play football, they look at it like ‘I want to be a part of something like that,’” Hale said. “‘I want to put another championship banner up at the gym.’”

The Huskies finished their season with a 9-2 record. 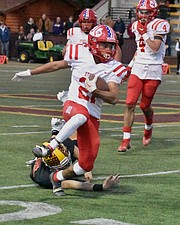 Junior running back Alex Mendez races by an Enumclaw defender on Saturday. 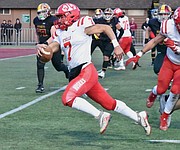