Family and friends were on hand at the Wenatchee Valley Museum & Cultural Center Tuesday to welcome 25 new U.S. citizens.

Twenty-five people raise their right hands and swear their allegiance to the United States as citizens Tuesday during a naturalization ceremony in Wenatchee.

WENATCHEE — It was an emotional, ebullient moment when 25 immigrants to the United States took their oaths of citizenship Tuesday in Wenatchee.

“Citizenship is a unique bond that unites people around the civic ideals and a belief in the rights and freedoms guaranteed by the U.S. Constitution,” said Patrick Molitoris, U.S. Customs and Immigration Services officer in his opening remarks. “So today, we will we celebrate citizenship and the bond we will soon share as fellow Americans.”

The Wenatchee Valley Museum & Cultural Center was the venue for the ceremony, and it was filled with not just prospective citizens but their families and friends as well. Members of the local community came to welcome the new citizens as well including the mayors of Wenatchee and East Wenatchee, police officers, teachers and volunteers.

Jose Mendez of Mattawa took his oath after being in the U.S. for 22 years. His wife Evelia was there to cheer him on, along with their three boys.

“I was raised here my whole life,” Mendez said. “And I went to school here and everything. I felt it was the best thing to do since I feel I belong here.”

The candidates for citizenship had put in a lot of work to get to where they were Tuesday. Immigrants must be legal residents in the U.S. for almost five years (three if they’re married to a citizen) before they can even apply for naturalization, according to the Washington Department of Social and Health Services website. The process takes anywhere from a year to a year and a half after that. Candidates must be proficient in English and have a basic knowledge of U.S. history and the workings of the government.

The new citizens came from all over the globe. Before they took their oaths, Immigration Services Officer Jaisung Sun asked candidates to stand as he read off their countries of origin: Canada, India, Iraq, Laos, Mexico, Morocco, Vietnam and Italy.

“The next time you take a seat, you’ll be an American,” he told them.

The keynote speaker was Norma Gallegos, program director for Hand in Hand Immigration Services in Wenatchee and herself a naturalized citizen.

“I came to the United States as a child,” she said. “There were a few very important things that I shall never forget that I learned from my mother. Always embrace this country as your own; contribute to your community, to your country. And there are so many ways to do that. Becoming a U.S. citizen comes with a huge responsibility: the responsibility to be a role model citizen, a good neighbor, maybe fighting for your country, defending your country, making decisions for your country and contributing to your country. Everything starts at home, your family values: how do you welcome your neighbors? How do you welcome the stranger in your city, in your state?”

Organizers presented a short pre-recorded video by President Joe Biden, talking about the role generations of immigrants have played in building our country and addressing participants for the first time as “my fellow Americans.” The new citizens then said their first Pledge of Allegiance as full-fledged Americans, and one by one, came to the front to receive their certificates. Bursts of applause came from the audience, and tears could be seen on more than one face.

“We have so much to celebrate today,” Molitoris said in concluding the ceremony. “And we leave today knowing that our country is stronger than it was 40 minutes ago, with the addition of these 25 U.S. citizens.” 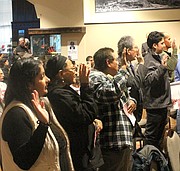 Twenty-five people raise their right hands and swear their allegiance to the United States as citizens Tuesday during a naturalization ceremony in Wenatchee. 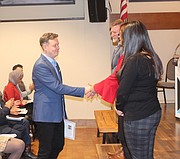 Family and friends were on hand at the Wenatchee Valley Museum & Cultural Center Tuesday to welcome 25 new U.S. citizens.