Zane Katchen brought live Pacific Lamprey for kids to see, touch, learn about and squeal over. The eel-like fish is a traditional food of the Columbia Plateau people.

Grant PUD brought materials for kids to color and make their own salmon hats at Archaeology Days at the Wanapum Heritage Center Oct. 25.

PRIEST RAPIDS DAM — Inside the Wanapum Heritage Center at Priest Rapids Dam, there’s a sign that says, “We are Wanapum, we are here, we never signed a treaty, we never gave away our land, we never left, we are going to be here tomorrow.” That timelessness was out for all to see during Archaeology Days Oct. 25-26.

“It's just kind of a combination of fun and education,” said Christine Pratt, public affairs officer for the Grant PUD. “Kind of visual and fun and face to face with the people who know about things, the Columbia Basin Plateau peoples. You can hear their story in their own words, from them, live while you're learning how to do their craft. It's pretty amazing.”

Nobody seems to be certain exactly when the first Archaeology Days was held, but Pratt said it was in the early 2000s. The event, like so much else, went on hiatus during the pandemic, so this year’s was a welcome return. Tuesday was kids’ day, with nearly 500 students from central Washington schools bused in to learn about Wanapum and other Native tribes’ customs, crafts and history.

Near the entrance to the heritage center, Wanapum elder Velma Wyena stood at a table showing how to make intricately-beaded moccasins from buckskin.

“When I was probably about these kids' age,” Wyena said, “my grandma gave me one little piece of buckskin and gave me some beads and said, ‘Here you go. I'm gonna show you this and then I want you to make something.’ I said, ‘Oh, okay, Grandma,’ and I did. I made something for her. I just made two letters, H-I, ‘Hi.’ That was my first making.”

Not far away, Yakama weaver Lindsey Howtopat had a variety of traditional cedar bark baskets spread on a table. The traditional design of the baskets works better than a lot of more modern configurations, he said.

“When you use a metal or plastic container, all your berries on the bottom are going to be mushy, runny. But when you use a natural basket, the juice goes into the bark, and none runs out. You can fill this up on Friday, go fishing, hunting, whatever all weekend. You get home on Monday. Then you open it and your berries are just like the day you picked them.”

Outside, Lloyd Barkley was showing some flint knives and arrowheads and describing how to make them with a technique called pressure flaking.

Grant PUD and the Wanapum Tribe have a relationship that’s unique, Pratt said. The tribe’s ancestral homeland stretched along the Columbia River’s shores from Vantage down into the Hanford Reach, and the PUD treats that tie between land and people with great respect, she said.

“We're the only utility that I've ever heard of that has a relationship with an Indian tribe like Grant PUD has,” Pratt explained. “Back in the ’50s, when Grant (PUD) wanted to build its dams, the Wanapum were living on the shoreline, as they always have. They've never relocated to a reservation because the land is extremely important to them … So when Grant PUD was considering building dams, it approached the Wanapum. And the Wanapum agreed not to object to the construction, as long as the Grant PUD would help them preserve and perpetuate their culture and protect their lands and allow them to remain on their homelands.”

“We have specialists on staff who work with the Wanapum, to recover artifacts found on the reservoir lands, and to help them protect and keep people away from sacred special areas,” she added.

There were other aspects of the region’s history and culture to see as well. There were displays of rocks and replica fossils showing the ancient geology of the Hanford Reach region. The wildlife of the area was also on display. Inside the heritage center, Keaton Buell of Birds of Prey Northwest held a crowd of students rapt with a pair of raptors.

“We have the peregrine falcon right here,” he said, holding up a fierce-looking bird named Artie. “They’re the fastest animal in the entire world. They can dive at speeds of 240 miles per hour out of the sky and kill their prey on impact alone.”

“It's totally unique,” Pratt said of Archaeology Days. “And it's completely homegrown. Everybody who participates is just so enthusiastic and happy to be there, to share their knowledge.” 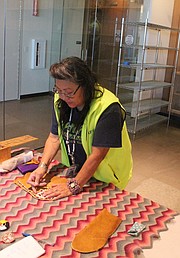 Grant PUD brought materials for kids to color and make their own salmon hats at Archaeology Days at the Wanapum Heritage Center Oct. 25.

Zane Katchen brought live Pacific Lamprey for kids to see, touch, learn about and squeal over. The eel-like fish is a traditional food of the Columbia Plateau people.