Isaac Lunderville and Alice Ness, both of Moses Lake, will compete at the Special Olympics USA Games in Orlando, Florida at the beginning of June.
Ruth Lunderville/courtesy photo

Isaac Lunderville, pictured with his twin brother John, will be competing at the Special Olympics USA Games. Isaac will be playing in honor of John, who passed away from cancer in 2017.

MOSES LAKE — Two Moses Lake athletes have qualified to compete in the Special Olympics USA Games that will be held in Florida at the beginning of June.

The USA Games, held in Orlando Florida, will feature more than 5,500 athletes and coaches from all 50 states and the Caribbean. There will also be 20,000 volunteers and 125,000 spectators at the event, according to Tim Toon, Special Olympics East Region program manager.

Information provided by Toon states that besides bowling, Ness has also been involved in Special Olympics cheerleading, bocce and track and field. She has earned more than 150 medals in her Special Olympics career – many of those gold.

Ness trains at Lake Bowl and her highest bowling score is 151.

Ness wanted to thank her local bowling coach, Pam Schmidt, for bringing bowling back after the pandemic.

According to the information from Toon, Ness is looking forward to hanging out at the Olympic Town, getting free stuff – especially shoes and getting to go to Disney World.

Lunderville has been involved in Special Olympics for about eight years and has participated in bowling, basketball and track and field), as well as bocce. He has earned more than 25 medals in his Special Olympics career – many of those gold.

Bocce is an Italian game whose object is to roll a ball closest to a target ball, Toon wrote. Players can use their ball to bump their opponent’s ball farther from the target ball as well. Next to soccer and golf, bocce is the third most-played sport in the world, Toon wrote.

“Special Olympics is great because they have a healthy athlete program where (Isaac) got a fitbit to track his steps,” said Ruth. “It’s all about encouraging being healthy.”

Lunderville is a very laid-back guy and said that his favorite part of Special Olympics is just having fun. He also said he does not have a specific goal for the USA Games; he is happy with however he does at the competition.

“...just whatever it leads to,” said Lunderville.

While Lunderville enjoys the game, he is also playing to honor his twin brother – John – who passed away from cancer and was also a Special Olympian.

Besides competing in bocce, Lunderville is looking forward to going to Disney World and visiting museums while at the USA Games.

When he is not competing, Lunderville enjoys relaxing and listening to music among other things. He is also working on writing a book. When asked what it was about, Lunderville replied, “That one, I’m not telling.” 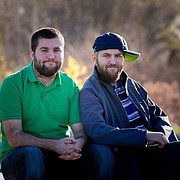 Isaac Lunderville, pictured with his twin brother John, will be competing at the Special Olympics USA Games. Isaac will be playing in honor of John, who passed away from cancer in 2017. 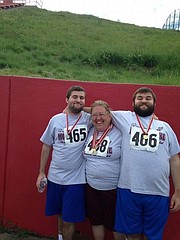