Guitarist Pierre Bensusan performs in concert. Bensusan will perform in Moses Lake Wednesday at a free concert sponsored by the Learn from the Masters Music Organization. Bensusan has been playing guitar most of his life and said the music really shines when voice and guitar blend together to become more than what they are alone.
COURTESY PHOTO/PIERRE BENSUSAN

Pierre Bensusan, pictured, will visit North Central Washington for a series of free concerts, including Moses Lake Wednesday and Cave B Winery near Quincy Saturday. The French guitarist lives in Paris and is traveling to promote his album that came out just before the pandemic began.

MOSES LAKE — Guitarist Pierre Bensusan will perform in concert at 7 p.m. Wednesday in Moses Lake for the first in a series of Columbia Basin appearances sponsored by the Learn from the Masters Music Outreach.

Bensusan will perform in Moses Lake at the Civic Center Auditorium at 401 S. Balsam St. in Moses Lake, then in Ellensburg on May 19, in Wenatchee May 20 and at Cave B Winery near Quincy on May 21. The first three concerts are free, but the finale has a cost of $35 in advance or $40 the day of the event.

Bensusan said his goal is to make the music, not the instrument or the player, the center of the performance.

“I wouldn’t really want people to think about the guitar when I play, but about the music and what it evokes,” he said. “I’m telling a story with it, and after a while, player and guitar become invisible. People use sound and sonic images to go into their own inner self and dimension. Music is only a pretext for all of us to get there, player and listener.”

Music Outreach founder Larry Birger said both he and Bensusan agreed the concerts should be presented free of charge. Birger said he has experienced the support that music can provide in his life, and he wants to pass that along. The concerts are a way for LMMO to promote healing following the COVID-19 pandemic.

Birger characterized Bensusan as a master of acoustic guitar.

Bensusan’s Moses Lake performance is part of a U.S. tour promoting his 2020 album “Aswan.” The French musician lives in Paris. He was originally touring to promote the album in 2020 when it was shut down by the COVID-19 pandemic in March of that year.

The album features all original compositions, and in fact, most of his music is original.

“I also arrange and interpret some traditional music in my own way,” he said.

Writing original music starts with inspiration, he said; nature was the inspiration for his latest album, but it can come from anywhere.

“Inspiration also comes from various sources, such as guitar improvisations, reading books, watching movies, travel, meetings, listening to other musicians and mostly observation from my own imagination, where the sky's the limit,” Bensusan said.

It’s a bit of a leap of faith.

“I just have to jump into my own self, take a big jump and see what comes out,” he said. “I imagine the music I’d like to hear loud and clear, play on my guitar - and with my voice - and share with others. It’s a bit like stating a vision of the world, where we are and where we could go.”

It can take time - sometimes a long time - for a composition to come together, he said.

“There’s a saying, ‘You can’t go faster than the music.’ It could incubate for years before it comes to the surface. There’s no need to rush that process.”

In other cases, inspiration really does strike fast.

“Some other times, it’s all there, immediately. Like a snapshot - a lucky moment. You have to be ready for that,” he said.

Bensusan said he builds a mental frame for his composition, like a set for a movie or play.

“From there I compose - often away from my guitar - and then use voice and guitar to make sure that it’s all playable, as easy as it can be, never too rich and sounds right,” he said. “It’s sometimes easy to play and sometimes challenging, so I study hard to bring my technique and expertise to the required level.”

Voice is as important to performing as guitar, he said. The two work together to create something that’s more than the sum of its parts, in his experience, and when the performance is right, the guitar and his voice fade into the background.

“It must enter into a more abstract zone where music resonates just by its presence. It has to sing. Guitar and voice share that goal,” he said. “Sometimes the guitar is alone. Sometimes the voice takes the lead while the guitar plays a different part - or the voice accompanies the guitar.”

When instrument and voice align just right, that’s when the magic of music happens, he said.

“They share the spectrum and have the courtesy to let each of them express whatever needs to be there. When guitar and voice interact together, it’s like the color of a third indefinable instrument,” Bensusan said.

Bensusan said he’s been playing music almost all his life.

“I have played music since I was six years old and I’m 64 now,” he said. “I started to play professionally when I was 16. I feel lucky and grateful.”

He’s not entirely sure he’s a master of the guitar, he said.

“A lot of love and a life commitment,” he said, when asked what goes into mastering guitar. “You never get there, and the more you know, the more you are aware of what you don’t know. It’s a never-ending process. That’s what makes it scary, but also ultra-exciting and a grandiose way to go through life.” 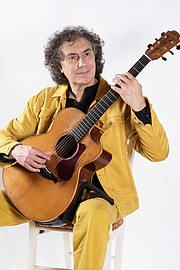 Pierre Bensusan, pictured, will visit North Central Washington for a series of free concerts, including Moses Lake Wednesday and Cave B Winery near Quincy Saturday. The French guitarist lives in Paris and is traveling to promote his album that came out just before the pandemic began.

CORRECTION: May 17, 2022. “Stage Front” Page B1. Tickets will be required for Bensusan's May 21 concert at Cave B Winery near Quincy.Tickets may be purchased, and people can register for the free concerts, at the LMMO website, lmmo.org. Tickets for the final show are $35 advance/$40 day of event.