Exchange students Elén Lovas, 18, from Norway, and Lena Hartmann, 17, from Germany, spent the last year studying at Moses Lake High School as part of an Education First exchange program. Both are heading back to their home countries on June 9, roughly a week after the MLHS 2022 graduation ceremony.
CHARLES H. FEATHERSTONE/COLUMBIA BASIN HERALD

Lena Hartmann as a member of the MLHS Chiefs girls volleyball team. In addition to participating in sports, Hartman was also able to obtain her Washington drivers license while living here as an exchange student.

Elén Lovas as a member of the MLHS Chiefs girls soccer team. She said one thing she liked about her time in the U.S. is how youth athletics is organized when compared to her homeland.

Rod Richeson, owner of Blue Sky Aviation, has been hosting exchange students in Moses Lake for the last five years.

“It’s definitely much smaller,” said Hartmann, 17, a native of Munich in the German state of Bavaria. “I kind of like it. It’s something different.”

“You drive everywhere,” added Lovas, 18, and a resident of the Norwegian capital of Oslo.

“I started off with a little homesickness, and I think that’s pretty typical,” Lovas said, noting that when she started her studies in Moses Lake last fall as part of an Education First exchange program, it took some time to adjust.

But as she nears the end of her time — both young women return to their home countries on June 9 — Lovas has found she’s become attached to life in Central Washington.

Hartmann mostly agreed. A year seemed like a long time when she first arrived, she said.

“It was a great year. I’m glad that I can go home but also, I’m really sad, because it’s been so great. The months have been going by so fast,” Hartman said.

Rod Richeson, owner of Blue Sky Aviation, a repair and service company based at the Moses Lake Municipal Airport, and both Hartmann’s and Lovas’ host father for the year, has been hosting exchange student through Massachusetts-based Education First for five years. Richeson, who also has two daughters of his own, said he wanted to host exchange students because when he was a senior in high school, his family hosted an exchange student from Japan. He had found the experience of learning from someone of another culture up-close and personal to be rewarding.

“I feel like, being in Moses Lake, there’s a big world out there that some people don’t ever get to experience,” he said. “And this is a way to bring some of that here, and potentially let a lot of other people experience.”

Richeson said Education First gives potential host families the ability to choose their exchange students, who sign up by telling a little about themselves, their interests and the things they like doing. He said his family always tries to pick kids with an interest in playing sports since that’s something his family has always done.

And school sports — most high schools in Europe do not offer athletics, so young people interested in playing team or individual sports must join clubs — are also a way for exchange students to meet people and make friends, Richeson said.

“As soon as they get here, we get them into soccer, and all of a sudden, they’ve got 60 people that they know for the first day of school,” he said. “They get their two weeks of practice, and they know some faces and they know some names before they go to school.”

Neither Hartmann nor Lovas chose Washington state or Moses Lake. Rather, they said, they focused on finding a good host family. They both noted that MLHS is far larger than either of their big city high schools, and they offer far more subjects for students to study, such as photography.

“I get to do a lot of different stuff here when compared with back home,” Lovas said.

In fact, both Lovas and Hartmann studied for and got their drivers licenses — something they would not have done as high school students in Europe.

Both Hartmann, who played basketball, volleyball and ran track this year at MLHS, and Lovas, who played soccer and also ran track, said sports is by the biggest difference between school in the United States and in their homelands.

And Lovas noted that the American way of organizing youth sports has some advantages over Europe’s, which tends to focus and encourage those who are most interested in actually making money out of athletics.

“I really like the different levels,” she said. “Everyone who wants to play doesn’t have to be on your way to be a professional.”

Both Hartmann and Lovas said they aren’t sure what they are going to do when they get home. Each has at least one more year of school, and Lovas said she has a year of mandatory military service to do in Norway once she completes high school.

“I have to decide after that,” Lovas said.

If neither of the girls is looking forward to leaving Moses Lake, Richeson — an old hand when it comes to welcoming and saying farewell to exchange students — said it never gets any easier saying goodbye to the young people he and his family have welcomed into their home for a school year.

“It’s always tough,” he said. “You develop a bond, and I have seven ‘daughters’ that live in foreign countries.”

Charles H. Featherstone Can be reached at cfeatherstone@columbiabasinherald.com.

Rod Richeson, owner of Blue Sky Aviation, has been hosting exchange students in Moses Lake for the last five years. 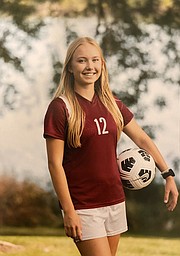 Elén Lovas as a member of the MLHS Chiefs girls soccer team. She said one thing she liked about her time in the U.S. is how youth athletics is organized when compared to her homeland. 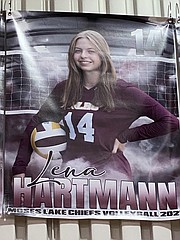 Lena Hartmann as a member of the MLHS Chiefs girls volleyball team. In addition to participating in sports, Hartman was also able to obtain her Washington drivers license while living here as an exchange student.