Warden High School senior Kiana Rios (1) celebrates as she rounds third base to home plate after hitting the ball over the fence. That home run was also the 10th run for Warden, triggering the 10-run mercy rule and ending the game. Warden Head Coach Randy Wright smiles in the background.
REBECCA PETTINGILL/COLUMBIA BASIN HERALD

Royal High School took on Warden High School at Warden on Tuesday. Warden won both games of the doubleheader 10-0 and 13-3.

WARDEN — The Warden High School fastpitch team took a big victory over the visiting Royal High School girls in a doubleheader on Tuesday.

In the first game, Warden got the jump early and was up six runs by the middle of the third inning. However, Royal held out and kept Warden from getting their 10th run over them until the sixth inning.

In the second game Warden again worked a bit of magic on the diamond and took the game 13-3.

Warden Head Coach Randy Wright said the game was a measuring stick for the Lady Cougars.

He explained while the Warden softball team is happy to go to state, he does not want to settle for that. The team will be there on a mission and that mission is to come home with the trophy.

Wright said his team's strengths this season include strong senior leadership and how well the team members get along with each other and the confidence that leads to.

Warden’s overall record this season is 19-1 with a conference record of 8-0. The Lady Cougars' last regular-season game is Friday against Dayton-Waitsburg. They are also ranked No. 1 in the 2B softball category according to the Washington Interscholastic Activities Association Rating Percentage Index.

Wright said he fully expects them to play their first round of districts at home next Tuesday. Their opponent has not yet been selected pending the results of this week’s games.

Royal holds a 12-3, 5-1 conference record and 5-1 in the conference. They are ranked 5th in RPI for 1A. Their last regular-season game is Saturday against Kiona Benton City High School. 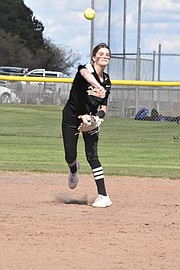 Royal High School took on Warden High School at Warden on Tuesday. Warden won both games of the doubleheader 10-0 and 13-3.