‘The Sound of Music’ takes the stage in Moses Lake

Prospective governess Maria Rainer (Amy O’Donnell) sings to bolster her confidence in a dress rehearsal for “The Sound of Music,” presented by Basin Community Theater. The local production is based on the original play rather than the movie script most are familiar with.

MOSES LAKE — The hills – and the Moses Lake High School theater – are alive with “The Sound of Music.”

“It's not the movie version, it is the actual play,” said Marion Wyman, the show’s producer. “So it varies a little bit. There's a couple of musical numbers people probably won't recognize. But most of them, they will.”

The beloved Rodgers and Hammerstein musical is presented by Basin Community Theater and opened yesterday, directed by Toby Black of Moses Lake. The play first opened on Broadway in 1959 and was made into a hugely successful movie in 1965, which is perhaps the version most audience members will be familiar with.

“The Sound of Music” is set in Austria in 1938, on the eve of the Anschluss, the annexation of Austria by Nazi Germany. Maria Rainer (Amy O’Donnell) is a postulant, a prospective nun with a lot more enthusiasm and piety than self-discipline. Reluctantly, the Mother Abbess (Deborah Roeber) sends Maria away from the abbey, with a job as governess to seven children of the widowed Captain Georg von Trapp (Brad Sorenson).

Upon arrival at the von Trapp home, Maria finds that the captain runs his household like a ship, with strict order and no play or frivolity – and above all, no music. This is intolerable to the bubbly Maria, who wins over the captain’s children, Liesl, Friedrich, Louisa, Kurt, Brigitta, Marta and Gretl and sets about teaching them to sing. The captain’s initial anger soon softens as he rediscovers the joy in music, as well as noticing Maria’s own charms.

Complicating matters are a baroness (Stephanie Moore) who hopes to marry Captain von Trapp, a delivery boy (Zeke O’Donnell) who is sweet on 16-year-old Liesl (Julia Heaps) and, of course, the German government, which puts heavy pressure on the proudly Austrian captain to return to military service under the Nazi flag. There’s safety and freedom for the family just over the Alps in Switzerland – but can they get there?

This production has been a popular one, said Wyman, with record ticket sales. Two shows were sold out as of April 29, she said, but that’s only according to the website. The troupe has to project a certain number of sales in order to get the license to produce the play, but that doesn’t necessarily reflect what’s actually available.

“Our projection on average is about 200 seats per show,” she said. “So two shows already now are sold out online, but there will be 220 tickets at the door that they can buy.”

Wyman expressed appreciation for the cast and the orchestra, all performers from the local community, and saved a special shout-out for the director.

“Really, the star of the show is Toby,” she said. “He is the director, the choreographer, the set designer - everything is his vision. He has it all in his head, and he's the one that brings it to life.”

Joel Martin may be reached via email at jmartin@columbiabasinherald.com.

Prospective governess Maria Rainer (Amy O’Donnell) sings to bolster her confidence in a dress rehearsal for “The Sound of Music,” presented by Basin Community Theater. The local production is based on the original play rather than the movie script most are familiar with. 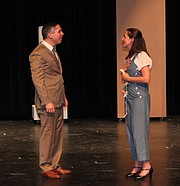