The Moses Lake High School fastpitch team is continuing its steady streak of wins in hopes it can take the league title and punch its ticket to the state tournament.
REBECCA PETTINGILL/COLUMBIA BASIN HERALD

The Moses Lake High School Chiefs fastpitch team is currently 15-3-1 overall and 8-1-1 in the Big 9 Conference, and holds a No. 8 ranking by the Washington Interscholastic Activities Association Rating Percentage Index.

On Friday, the Moses Lake Chiefs swept visiting West Valley to stay in contention for the Big 9 League title with a come-from-behind win in game one and mercy rule finish in game two. Moses Lake and West Valley entered Senior Night at Moses Lake High School tied with Eastmont for the league lead. The Chiefs celebrated their two seniors, Rylie Sanchez and Jenna Rowland, with a ceremony before the action got started in their last home games as Chiefs.

Moses Lake held a comfortable lead in game one until West Valley plated six runs in the top of the fifth inning as they caught up to freshman Paige Richardson, taking the lead 8-6. Morgan Ross would relieve Richardson and the bats for Moses Lake would retake the lead from the visiting Rams, winning 11-8.

“As coaches, we talked about being good one to nine (first nine of the lineup); we are a tough out everywhere and the way we are playing now, clean and clutch two-out hits even when we got down we came out fighting and swinging,” head coach Mike Hofheins said.

Offensive leaders for Moses Lake in game one were Jazlynn Torres, 3-4, Katelyn Kriete, 3-4 with three RBIs and Sanchez, 2-4 with two RBIs.

Game two saw the Chiefs jump out to a six-run lead through the second inning and they never looked back, invoking the run rule after the sixth inning. Moses Lake's bats stayed hot with Ali Stanley, 3-3 and two RBIs, Torres, 2-3 and three RBIs and Sanchez two RBIs leading the way. Ross picked up the win while striking out six Ram batters and giving up only six hits in the game.

Then on Tuesday, Moses Lake traveled to Richland for a non-league contest against perennial 4A power Richland High School and came away with another win, 7-4.

Ross got the start in the circle and picked up the win, going five innings with four strikeouts. Richardson would relieve Ross in the fifth inning to close out the game and pick up her third save of the season.

The Lady Chiefs are currently 15-3-1 overall and 8-1-1 in the Big 9 Conference, along with a No. 8 ranking by the Washington Interscholastic Activities Association Rating Percentage Index.

A tie with Eastmont is looming as a game that will need to be finished to decide the regular season league champions, barring a loss by either Eastmont or Moses Lake this week.

The date and time to finish that game have yet to be decided.

“Ultimately, this game is for all the marbles. One of our goals was to win the league and we are still in a position to do that and we feel good about it,” said Hofheins.

The Lady Chiefs finish their league schedule this Friday at Sunnyside. 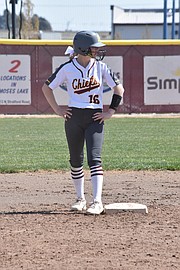 The Moses Lake High School Chiefs fastpitch team is currently 15-3-1 overall and 8-1-1 in the Big 9 Conference, and holds a No. 8 ranking by the Washington Interscholastic Activities Association Rating Percentage Index.