Smiles were frequent as guests mingled and enjoyed the flavors of local cuisine and drinks.
REBECCA PETTINGILL/COLUMBIA BASIN HERALD

The second annual Bourbon & Bowties Gala, held April 29, saw guests dressed to the nines in dresses and tuxes. Proceeds from the event support efforts to bring a new hospital campus to the Columbia Basin.

The Bourbon & Bowties black tie event was sold out on April 29. More than 350 guests were able to enjoy the finest of dining from local restaurants and vendors.

MOSES LAKE - The second annual Bourbon & Bowties Gala was held April 29 at the Grant County Fairgrounds where members of the community came together to financially support the building of a new Samaritan medical center.

Gretchen Youngren, Chief Development and Communications Officer for Samaritan Healthcare said their goal for the night was to raise $100,000. That night they raised about $216.000. This amount however, is prior to any costs and expenses. All proceeds from this year’s event will go toward the building of a new hospital.

The total project cost to build the new campus is hundreds of millions of dollars but after a loan from the USDA, Samaritan was only responsible for $28 million. $10 million was already paid for by Samaritan for the land, leaving $18 million to cover. The Samaritan Foundation is trying to raise $5 million of that to take some of the load off the hospital district. Bourbon & Bowties was one way the foundation looked to raise the money.

“I think the biggest thing for tonight is really people just continuing that vision of why we are building a medical campus,” said Theresa Sullivan, Samaritan Healthcare Chief Executive Officer. “Having the community believe that and know that that’s their campus. We’re a public district hospital, and this is the community’s hospital.''

Sullivan noted that this is special because building a new medical center is a once in a generation event. The existing Samaritan facility first opened in the 1950s and has been enlarged over decades since.

Youngren said foundation officials started their campaign for the new medical campus in January of 2020. She explained that they were four weeks away from a sold out second Bourbon & Bowties event when COVID-19 shut down events and businesses across the state and country.

“We still knew as an organization, we were going to be building a new hospital, a new medical campus and so over the last two years, we've been quietly fundraising and tonight we take that campaign public. So tonight, we announce that so far, we've raised over a million dollars towards our $5 million goal. And tonight will be the first time the public has seen images of what the interior of the new hospital is going to look like,” said Youngren.

Youngren said Samaritan Healthcare is gearing up to break ground on the new property in the coming months so the timing of the event felt perfect.

Last time the event was held, in 2019, it was in one building of the rodeo grounds’ events center, but this year it was expanded to two buildings connected by a tent.

The first building, where guests entered and checked in, showcased about a dozen different raffle items. Raffle prizes were packages of varying worth and categories. Some included overnight stays, food and drink, or sport or music event tickets. Guests could buy raffle tickets for $20 each or a book of 25 for $100 to put in whichever raffel packages they wished.

The event was capped at 365 guests this year.

The second building hosted the dining area with local restaurants competing in a cook off. (See our Wednesday Lifestyle section for more on that…) Dozens of tables were set up and food and drink options lined the outer walls. All the food and drink vendors had direct connections to Grant or Adams county, Youngren said.

“(The event is) extremely local, and that's the theme of our campaign which is ‘build community’ because in our mind, a new medical campus doesn't just mean better health care, it goes a long way towards advancing our entire community as a whole,” said Youngren.

Just prior to dinner, there was a short program where Samaritan unveiled a video featuring conceptual designs for what the new medical campus will look like. The video included comments from community leaders with the Moses Lake Police Department, Grant County Sheriff’s Office, Moses Lake Fire Department and Quincy Valley Medical Center. Those representatives expressed support for the new facility and discussed the importance of modernizing the hospital to provide the best possible care to area residents.

After mingling and eating, the event moved on to the portion where foundation officials drew the raffle winners, held a live auction for three lucrative packages and presented the Samaritan patient family story.

Youngren said she has gotten many questions on when the next Bourbon & Bowties event will be held but does not have an answer yet.

“And to be completely honest, the big thing with this is it’s not just our staff hosting the event, it's a whole community coming together so we don't know if we're going to host it next year, but we do anticipate to host it continually in the future,” said Youngren

Theresa Sullivan, Samaritan Healthcare Chief Executive Officer, gave a short speech at the event. Sullivan said the hospital has secured most of the funding needed for a new hospital campus to support the area, but local funding - raised in part by the Bourbon & Bowties event - are still needed to cover the remainder.

The Bourbon & Bowties black tie event was sold out on April 29. More than 350 guests were able to enjoy the finest of dining from local restaurants and vendors. 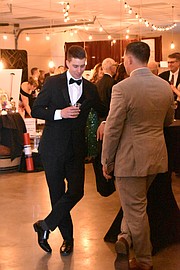 The second annual Bourbon & Bowties Gala, held April 29, saw guests dressed to the nines in dresses and tuxes. Proceeds from the event support efforts to bring a new hospital campus to the Columbia Basin.