Cello, vocal duo to perform in concert in Moses Lake

The concert is sponsored by the Central Basin Community Concert Association. Typically CBCCA performances are at the Wallenstien Theater on the Big Bend Community College campus, but the theater is being remodeled.

James was a participant in the eighth season of “America’s Got Talent,” according to the duo’s website. As a solo artist he has performed with the Metropolitan Opera, the Los Angeles Opera and the Lyric Opera of Chicago. He’s also performed as a soloist at venues around the world, from Sweden to South Africa.

Clark, a native of Australia, plays piano as well as cello and is an arranger and musical director. He was a music teacher before starting a performing career. The two men first worked together when Clark was the musical director and James one of the performers in a charity concert in Los Angeles.

Both have classical music training and use their classical background as part of their performance, but also play original music as well as their interpretations of pop music. Their repertoire includes a flamenco-influenced version of “Hotel California” and their interpretation of “Unchained Melody.”

Tickets are $25 for adults, $10 for students and $55 for a family and will be available at the door. There’s a discount for music students, which includes band and choir students as well as people taking individual lessons.

In addition, some of the artists performing in CBCCA concerts provide musical education in the form of a workshop or short performance in area schools.

The CBCCA season returned for 2021-22 after being suspended for 2020-21 due to the COVID-19 pandemic. Branden & James is the third of four concerts.

America's Sweethearts will perform the season finale on April 22. The trio takes most of its music from the “Great American Songbook,” focusing on the World War II era but singing songs from the 1930s though the 1950s.

The CBCCA has been sponsoring concerts in the Columbia Basin since 1954, and for most of that time was a subscription series.

Season tickets do come with a perk, reciprocal agreements for concerts sponsored by other community groups that use the same booking company, Live on Stage. Season ticket holders can attend concerts free of charge in Wenatchee, Richland, Shelton, Longview, Bremerton, Centralia and Everett. 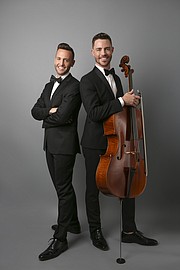 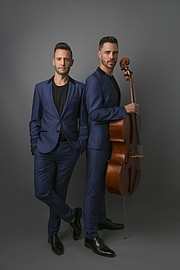