Othello Athletic Director Jenny McCourtie will be entering her fifth school year in a role that is predominantly occupied by men, but she says she loves the way she’s been welcomed by fellow ADs in the area.
IAN BIVONA/COLUMBIA BASIN HERALD

Jenny McCourtie said that her favorite part of the job is watching the young athletes succeed.

Jenny McCourtie, middle, poses with Othello softball coaches Mike Jensen, left, and Rudy Ochoa, right. Jensen and Ochoa served as coaches for McCourtie when she was in high school.

OTHELLO – Born and raised in Othello, Jenny McCourtie has spent the previous four years as the Athletic Director for Othello High School.

“I think that’s the best part about the job, is giving back,” McCourtie said. “Especially to your home town. I’m starting to see the cycle of some of my friend’s kids and people I’ve known my whole life, and just trying to make athletics the best experience - not only for the kids - but for the coaches and for our community.”

As the summer progresses and the school year is around the corner, McCourtie looks forward to continuing to lead Othello’s athletic programs to success and give back to the community that raised her. McCourtie, who is the athletic director for both middle and high school, takes pride in representing the Central Washington Athletic Conference as the conference’s only female athletic director.

“It doesn’t phase me at all,” she said of being the lone woman AD in the conference. “I'm kind of a tomboy, I grew up around boys anyway. I’ve had people ask me, ‘Hey, do you feel uncomfortable?’ and I’m like ‘No, not at all.’ I love all the guys that I work with, and they’ve always made me feel welcomed.”

Between issues with COVID-19 among the variety of other events that occur in a day in the life of an athletic director, like shortages of officials and bus drivers, McCourtie described the workday as a “jigsaw puzzle.”

With support from the Othello community and school staff, McCourtie and company were able to navigate through the previous school year, calling it a “really good year for us.”

One of the many things that McCourtie takes pride in is her 2020 CWAC AD of the Year award, which is voted on by all the athletic directors in the conference.

“I thought that was a big honor, especially when (the fellow conference ADs) were the ones that got to pick,” she said. “

Inside McCourtie’s office are nodes to past experiences in her life as an athlete, where she played basketball and softball at the collegiate level. With a degree from Central Washington University on her filing cabinet, flanking the degree to the left and right are a softball helmet and a basketball commemorating her 1,000 points scored at Othello.

“I played both basketball and softball in college,” McCourtie said. “I got my master’s from Central in athletic administration. That’s my 1,000-point basketball, so that’s one of my big accomplishments.”

McCourtie earned a scholarship to play basketball at Seattle University, where she played forward. She then transferred to Central Washington to play softball as a center fielder, saying she played softball around the country growing up.

“Teaching the kids just hard work,” McCourtie said of the lessons she took from being an athlete and applying them to her current role. “You don’t always have to be the best, but if you work hard good results are going to come.”

Following the completion of her master’s degree, McCourtie came back to the Basin and was an elementary physical education teacher for “a good handful of years,” before teaching P.E. and leadership at Othello. She was also a coach at Connell for eight years

“I came back home and there weren’t really any coaching positions open, and I really wanted to coach,” McCourtie said. “I (spent) eight years in Connell with their fastpitch program. We did really well, we won three state titles back-to-back-to-back.”

McCourtie joked that she sometimes received “ugly” looks from those in Othello while she was a coach with Connell, but she is now happy to be wearing the red and white of Othello again.

“I kind of got the ugly looks from Othello folks because when I grew up Connell was in our league,” McCourtie laughingly said. “So they were our rivals. It was kind of hard going from wearing red to purple, and now I’m back wearing red again.”

Following years as both an athlete and a coach, McCourtie is now entering her fifth school year as athletic director for Othello, with the transfer from coach to her current position being seamless.

“I think it’s a perfect transition,” she said of the move. “I’ve been there, I’ve done it and I feel like I can be a good leader in that sense. I have a coaching mentality, and the big thing is I try and do everything I can do so that the coaches can focus on the kids.”

With a job like being an athletic director, McCourtie relishes in being able to watch the young athletes compete in their respective sports.

“When that bell rings at the end of the day I get excited because I know I get to go around to practices and watch them compete at games,” McCourtie said of her favorite part of the job.

With the busy schedule that comes with being an athletic director McCourtie says she misses being able to teach and coach, but is something she would look forward to potentially doing again.

“I would love to get back into coaching again,” she said. “If the timing’s right and everything lines up I would love to, for sure.” 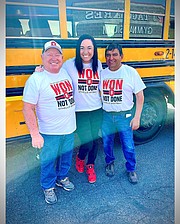 Jenny McCourtie, middle, poses with Othello softball coaches Mike Jensen, left, and Rudy Ochoa, right. Jensen and Ochoa served as coaches for McCourtie when she was in high school.

Jenny McCourtie said that her favorite part of the job is watching the young athletes succeed.