A photo of Eric “E DUBB” Kreuger, the namesake of EDUBS C/S, a custom auto detailing shop and clothing company owned by his brother Paul Carney. “C/S” means “con safos” — with safety — in Spanish, and is a saying used by Mexican Americans.

MOSES LAKE — It’s not often a brand new business throws a big party for the entire city, but that’s what Paul Carney is planning on doing this Saturday when he formally opens the doors on his clothing store and custom auto shop, EDEUBS C/S.

“I figured what better way to do a grand opening with a lowrider show,” Carney, an event promoter who relocated to Moses Lake a few years ago from Las Vegas.

And it’s all for a good cause with each $30 lowrider entry and 10% of vendor sales going to support programs with the Moses Lake Parks and Recreation Department, Carney said. The sole winner of the lowrider show — and Carney believes there should only be one winner — will receive $1,000 and bragging rights.

“Kids love car shows, but the majority of 10-year-olds, 12-year-olds that you know, after two hours walking around in the sun, they're like, come on, I want to go, I want to go.”

So what better way to keep people interested than having Mexican professional wrestlers come show off their skills in the ring?

Carney named the business in honor of his late brother Eric “E DUBB” Krueger, who created customized lowrider cars in a garage in Las Vegas, and sees the event as a way to bring the area’s English-speaking and Spanish-speaking communities together. He also sees the grand opening party as a way of giving something to the community. That includes showing children who might not see any alternatives that there are ways to live that don’t involve gangs and crime.

In addition, Carney said the Moses Lake Fire Department and Moses Lake Police Department have both said they will have vehicles to display. All three candidates for Grant County Sheriff — James Baker, Joe Harris and Joe Kriete — have accepted an invitation to spend an hour atop a dunk tank.

“They each get one hour to spend in the dunk tank and let the low rider community dunk them — three balls for $5 — and they all accepted. Every single one of them. They're actually even trying to help me find this dunk tank,” he said.

The event is scheduled for the EDUBS C/S parking lot on Saturday, July 23, with the published schedule saying things start at 9 a.m. Lowriders and Lucha is scheduled to last until midnight, with the winner of the lowrider contest expected to be announced at 9 p.m. However, Carney said it’s likely going to be closer to 11 a.m., with the first Lucha Libre match expected at around 1 p.m., in large part because Carney said he doesn’t want to take business away from the city’s farmer’s market.

“I adore the farmers market. My wife and I walk it. This would be the first Saturday we have not walked in a while,” he said. 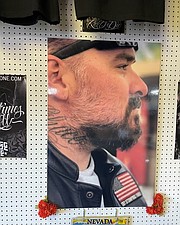 A photo of Eric “E DUBB” Kreuger, the namesake of EDUBS C/S, a custom auto detailing shop and clothing company owned by his brother Paul Carney. “C/S” means “con safos” — with safety — in Spanish, and is a saying used by Mexican Americans.