A Grant County Fire District 3 truck sprays water on the street – and some of the crowd – in the parade at the town of George’s Fourth of July celebration.
JOEL MARTIN/COLUMBIA BASIN HERALD

Kathy Hirschel gusses up 5-year-old Camila Ramirez at the George Independence Day celebration Monday. Face painting was one of several family-friendly activities at the event.

Elijah Gates, 4, left, and Anneliese Gates, 2, go after candy tossed out from the Fourth of July parade in George Monday.

Members of the Georgettes prepare to serve up slabs of what’s been billed as the world’s largest cherry pie at George’s Independence Day celebration Monday.

GEORGE — You would expect a town named for our first president to pull out all the stops for the Fourth of July - and you’d be right to do so.

“It’s a chance to meet with people, and let them get a taste of the healing waters,” said Andrew Vozniy of Soap Lake, who manned a booth with Nikita Vozniy to sell soaps and lotions made with Soap Lake water.

This is the business' second year participating in the festivities put on by the little town of 800-ish souls which was founded on Independence Day in 1957. George has been celebrating America ever since its founding. This year’s festivities started with the Cherry Bomb Fun Run, followed by a parade up and down the town’s main drag, Montmorency Boulevard. Then came the raising of the flag and the ringing of the Freedom Bell in the town’s park, led the Veterans of Foreign Wars. The crowd sang “The Star-Spangled Banner” while James Devany of Quincy raised the Stars and Stripes.

The park was filled with food and craft vendors of all kinds, offering everything from tacos and burritos to cowboy boots to elephant ears to T-shirts.

Traditionally, George’s Fourth is a chance for candidates for public office to introduce themselves or address the crowd, and many did. Candidates for Grant County sheriff, clerk and commissioner stood on the stage and gave their qualifications and visions for their prospective offices. State Rep. Alex Ybarra, who is running unopposed this year, spoke about the founding of America and Americans’ shared heritage.

The final and keynote speaker was Loren Culp, who ran unsuccessfully for governor in 2020 and is currently running to replace Rep. Dan Newhouse in the U.S. Congress. Culp read the entire Declaration of Independence to the crowd and followed with his own thoughts.

“This is why we celebrate Independence Day,” Culp said. “I never say ‘Happy Fourth of July’. You know why? Because I don't say ‘Happy 25th of December’ either. It’s Independence Day. We never want to lose the meaning. We never want to lose what our founders did for us and what they said and what they wrote. This is the greatest nation in the history of the world, and I am very proud to be an American.”

After the speeches were finished, the line formed up for a slice of the famous George cherry pie. The pie may or may not be the largest in the world, depending on whom you ask and what year, but at eight feet square, it’s certainly enormous. Slices are free, although donations to the Georgettes, the organization that makes the pie, are encouraged.

Debby Kooy, the director of the George Community Hall and coordinator of the festivities, cited John Adams to the crowd about celebrating Independence Day.

“‘It ought to be solemnized with Pomp and Parade, with Shews, Games, Sports, Guns, Bells, Bonfires and Illuminations from one End of this Continent to the other from this Time forward forever more.’” she quoted. “That kind of sounds like what we’re doing today, doesn’t it?”

Members of the Georgettes prepare to serve up slabs of what’s been billed as the world’s largest cherry pie at George’s Independence Day celebration Monday. 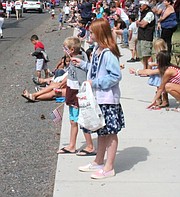 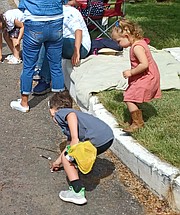 Elijah Gates, 4, left, and Anneliese Gates, 2, go after candy tossed out from the Fourth of July parade in George Monday.

Kathy Hirschel gusses up 5-year-old Camila Ramirez at the George Independence Day celebration Monday. Face painting was one of several family-friendly activities at the event.