Clairese Snyder of Quincy with her brother’s chicken during the 2021 Grant County Fair.

MOSES LAKE — Every year brings the unexpected, and 2021 brought more than its share.

“We were laughing earlier about how excited we were to see 2020 gone,” she said.

Business went pretty much as expected, but the year was still a bumpy ride. And that was also true for J.J. Heston, owner of Four Seasons Farm Service in Ephrata.

“We’ve had a normal year as far as sales go, and they were actually up a little bit,” Heston said. “But major supply issues.”

Joseph Moriarty is the manager of the Red Door Cafe, which was purchased by the Christian Missionary Alliance Church in July 2021. The new owners estimated they would serve 60 to 70 customers per day, based on the information they got from the previous owners. But the Red Door beat that estimate.

“The numbers have been at least 20% better than what we forecast,” Moriarty said.

But the discombobulated economy had an effect at Red Door too. Supply costs have gone up since last summer. A lot.

“About 30% across the board. And even more in some items,” Moriarty said.

Quincy Hardware and Lumber saw the impact of inflation – the rise in lumber prices was a topic of discussion all last summer. And while lumber prices have dropped, Stetner said the prices she pays for most of her merchandise are on the rise.

“Hardware, lumber and everything in between. Everything coming in the door,” she said. “Everything has been very volatile. Pricing is a huge concern.”

Heston explained how big increases in the price of one ingredient had an effect all the way down the line. In this case it was corn.

“Corn prices were through the roof,” he said.

Corn is part of nearly every animal feed sold at Four Seasons, so the spike in corn prices had additional effects.

“Just about everything on our food board went up,” Heston said.

The menu at Red Door has remained the same as it was under the previous owners, but the increase in the supply costs meant menu prices had to be raised twice by the beginning of January, Moriarty said.

Angel Ledesma, director of the Columbia Basin Cancer Foundation, said 2021 had its ups and its downs.

“We fortunately were able to finish a very successful campaign,” she said.

That was the two-year fundraising campaign to raise money for a new radiation treatment center for cancer patients in Moses Lake. The foundation worked with Confluence Health, the Confluence Health Foundation and the Wenatchee Valley Medical Group.

That was the upside. On the downside, a drop in donations left the foundation about $90,000 below budget. Ledesma said that could be attributed, in part, to a drop in the proceeds from the 2021 Country Sweethearts Ball, which had to go virtual.

The Grant County Fairgrounds was closed to events for most of 2020, and while the fairgrounds was busier in 2021, manager Jim McKiernan said activity still hasn’t returned to 2019 levels.

A lot of events did return in 2021, including the Grant County Fair.

“Obviously the fair was huge. Probably the best fair in attendance and revenue ever,” he said.

But people who might have scheduled a wedding or quinceañera at the fairgrounds were still holding back. And some of the big events like equestrian competitions drew fewer people, McKiernan said.

“How do you prepare for anything right now?” Stetner asked.

But there are some positive signs for 2022. McKiernan said event bookings for this year are up, including for celebrations like weddings. The Red Door staff has some plans, too. The Red Door is not only a cafe, it’s part of the church’s ministry, and Moriarty said one of the possibilities in the new year is to develop a back room for community outreach. The goal will be to provide support for single parents, homeless people and others in need, he said.

The cancer foundation’s Country Sweethearts Ball will be in person in 2021, and Ledesma said she’s looking forward to that.

“We really do depend on this benefit auction to get us back up to speed,” she said. “Fortunately, this is a fabulous community. An unbelievable community.”

Ledesma said she’s thinking 2022 will be a good year.

Clairese Snyder of Quincy with her brother’s chicken during the 2021 Grant County Fair. 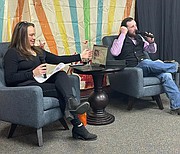