Robert Ruby saved everything, including sugar cubes, from his trip to the 1937 National Jamboree of the Boy Scouts of America.
Moses Lake Museum & Art Center/courtesy photo

Robert Ruby, center, included what he thought was an unflattering picture in the scrapbook he made detailing the 1937 National Jamboree of the Boy Scouts of America.
Moses Lake Museum & Art Center/courtesy photo

MOSES LAKE — Robert Ruby was the kind of guy who kept everything.

Ruby was a pioneering surgeon in Moses Lake, opening his practice in 1955. He was an enthusiastic collector of autographs,and he studied Native American culture and wrote a number of books about his research, including a biography of Chief Moses. He died in 2013 at 91.

But long before that, he was a 16-year-old from Mabton, part of a Boy Scouts of America troop attending the first ever National Jamboree in 1937. And he was the kind of guy who saved everything.

The scrapbook he made from menus, postcards, hotel stationery, a paper target he picked up at FBI headquarters, leaves from Mt. Vernon, a paper cup, the “Do Not Disturb” sign from a hotel room door, among many other things, is now part of the collection at the Moses Lake Museum & Art Center.

Robert Ruby, center, included what he thought was an unflattering picture in the scrapbook he made detailing the 1937 National Jamboree of the Boy Scouts of America.

Paper being fragile, the museum staff has photographed the pages. The book itself is not on display.

“It’s just a fantastic document of this moment in time,” she said.

An undated local newspaper clipping laid out the details. Eight kids and two adults made the trip to the 10-day jamboree.

“A full patrol will go from Mabton,” it read.

The kids needed credentials to get into the jamboree site, and Ruby kept his copy.

He was “an accredited member of an official contingent,” according to the credential.

It wasn’t cheap – the fare, the hotels and expenses were about $90, and that wasn’t counting the new uniform or the new backpack. It being 1937, the kids traveled by train, and they made the most of the opportunity to see the country.

Ruby glued a pamphlet he picked up in San Francisco into the scrapbook, showing the sights of the city, including the new Golden Gate Bridge. He included a page of postcards from Niagara Falls, and stationery from a New Orleans hotel.

The boys visited New York City, and had dinner at Jack Dempsy’s restaurant.

Jack Dempsy was a boxer, a former heavyweight champion, and in 1937, he was big. Michael Jordan big, LeBron James big. Tom Brady big. Sixteen-year-old Robert Roby was impressed. He saved a packet of sugar cubes and a matchbook from the restaurant.

“I was the first from our group of 10 to shake hands with Jack Dempsy and also the first to get his autograph,” Ruby wrote in his scrapbook.

The champ ran a spendy establishment. 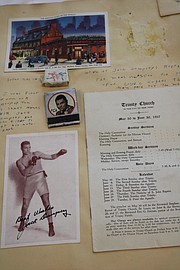 Robert Ruby saved everything, including sugar cubes, from his trip to the 1937 National Jamboree of the Boy Scouts of America.

Western Union printed a special telegraph form for the jamboree – the telegraph was a fast way to get the word out, the 1937 equivalent of texting. Ruby brought one of those home, and the special booklet the NBC network distributed promoting its radio broadcasts. The network came up with a snappy title, snappy titles being a thing in 1937.

“NBC at the Jamboree,” it said.

The final destination was Washington, D.C. The first jamboree actually was scheduled for 1935, but was postponed due to an infectious disease epidemic. In 1935, it was polio,and every family knew about and feared polio. No less a personage than President Franklin D. Roosevelt was a polio survivor, paralyzed from the waist down.

The Scouts had an elaborate camp along the banks of the Potomac River, at the base of Washington Monument. Roosevelt talked to the Scouts via a radio address and visited the camp, and celebrities of all kinds stopped by.

The Scouts went everywhere and saw everything, and Ruby picked up bits and pieces from all the stops.

The menu from the Capitol restaurant. A list of the members of Congress. Brochures from the Bureau of Printing and Engraving and the National Archives. And of course FBI headquarters.

The FBI in the late 1930s was as big as any movie star – in fact the FBI was the subject of many movies – and Ruby scored and pasted into his book an unused paper target. When he got home he wrote a letter to FBI Director J. Edgar Hoover, asking for his autograph. Hoover sent him a letter, which Ruby pasted into his scrapbook.

The jamboree had its own newspaper, the Jamboree Journal, which always included a map. Ruby saved the copy from the last day. The kids were encouraged to record their travels in and out of the camp on the map.

“If you’ve been wise you’ve saved the map copies that bear your pencil marks, to remind you in later days and after years where you went and what you did while you were a guest of the City of Washington,” it said. “The handsome buildings and the beautiful monuments you saw will flash on memory’s screen whenever you take a look at your First National Jamboree map.”