The Ritzville Carnegie Library is still operating in the same building that was paid for by Andrew Carnegie in 1907.
JOEL MARTIN/COLUMBIA BASIN HERALD

The shelves that house the books at the Ritzville Library are the same ones that were installed in 1907. The stuffed birds of prey that guard them are of more recent origin.

Millie Hopkins, circulation manager at the Ritzville Library, stands behind the library’s counter in December. Hopkins has been with the library for about five years.

RITZVILLE - It’s a long way from Dunfermline, Scotland to Ritzville, Washington. Four thousand, three hundred eighty miles as the crow flies, in fact. (A very, very determined and untiring crow.) So why is the name of a child laborer from Dunfermline engraved proudly above a building in Ritzville?

Because Andrew Carnegie loved books and wanted other people to enjoy them.

“Being an immigrant and being poor when he first got here, he was really into helping the working class work their way up,” said Millie Hopkins, circulation manager for the East Adams Library District, which operates the Ritzville Carnegie Library.

Carnegie, a Scottish immigrant who became, for a time, the richest man on earth, endowed more than 2,500 libraries all over the world between 1883 and 1929. Forty-three of those were in Washington state. Many of those original Carnegie library buildings have been turned to other uses as the number of books and patrons outgrew them. Today, 15 Carnegie libraries are still in operation in Washington in their original buildings. Of those, five are in Seattle and only two are east of the Cascades. The smallest town, both in Washington and in the United States, to be gifted a Carnegie Library was Ritzville.

The seeds of the library were planted by a man named Daniel Buchanan. Buchanan was another Scottish immigrant, born in Glasgow and emigrating to America in 1850, according to “An Illustrated History of the Big Bend Country.” He settled in Adams County around 1884, bringing with him the first well-drilling equipment to Adams County, and was a member of the constitutional convention that brought Washington to statehood in 1889. In 1902, Buchanan donated his private library to the town of Ritzville to start a library with. Accounts vary as to how many books he gave the town, but most agree with Hopkins that it was about 500. The donation was one of Buchanan’s last acts; he died the following year.

Once the town fathers had the books in hand, they wrote to Carnegie asking if he would build the town a building to keep them in. The answer came in 1906.

“If the City agree by Resolution of Council to maintain a Free Public Library at a cost of not less than One Thousand Dollars a year,” wrote Carnegie’s personal assistant James Bertram to William Proctor, chairman of Ritzville Library Association’s building committee, “and provide a suitable site for the building, Mr. Carnegie will be glad to give Ten Thousand Dollars to erect a Free Public Library Building for Ritzville.”

A carnival was held to raise the money, according to a 1924 article in the Spokane Spokesman-Review. “Preachers, saloon keepers, bank presidents and hod carriers (manual laborers) vied with each other in raising funds,” the article said. The city’s part done, Carnegie was as good as his word, and in 1907, Washington Gov. Albert Meade dedicated the library’s cornerstone.

A lot has changed in Ritzville, and at the library, over the course of 115 years, but some things haven’t. The building looks much the same inside and out, as photos over the decades bear out. The entrance is tall, with faux columns at either side of the sheltered entryway. The ceilings and windows are also tall, a relic of a time before air conditioning when good ventilation was a necessity. And above the front door is the sign that proudly proclaims the site a Carnegie Library.

The library still stores its books on the same sturdy wooden shelves that were installed in the original building, on the same hardwood floors. The stairs between the two stories have also stood the test of time, although an elevator was installed in 2017 to comply with disabled access regulations. One of the rooms at the front is for children’s books.

“Something Carnegie did was put in children's reading rooms,” Hopkins said, “which was a novel idea for that time. He credited one of his bosses from when he was younger. That boss opened up his personal library to his workers, which is where Carnegie started reading and learning.”

In 1980, the Ritzville Public Library was added to the National Register of Historic Places. In 2000, the library expanded its focus beyond Ritzville, becoming the East Adams County Library District. The library now has branches in Lind and Washtucna, located inside those towns’ school buildings. There’s also a kiosk set up at Benge, at the far east end of the county, where patrons can request books be delivered. The Lind and Washtucna branches are currently unstaffed due partly to the COVID-19 pandemic and partly to other factors, Hopkins said.

The little library has a lot going on.

“We are constantly looking for ideas and feedback from our community about what interests they have, how they like what we are doing now or what we can do to change things,” wrote Director Vanessa Grimm in an email. “Heather Carruth is in charge of the adult programming and community resources. She has been doing DIY, story time and Trivia Night on Facebook Live … We have a Page Turners Club, which is a book club for kids, we do a STEAM club, Lego Club and will also do Crafternoon. We recently started a D&D (Dungeons & Dragons) club which has been pretty popular and of course our summer reading program.”

The library also has a Youth Advisory Committee, headed up by Hopkins, and a team of teenage volunteers from the local high school, Grimm wrote. Hopkins also said there’s a bus that brings kids from the schools in both Lind and Ritzville to the library after classes.

Future plans include a bookmobile that will double as a rolling internet hotspot, which would bring some much-needed resources to the remote parts of Adams County, Grimm added.

“My overall goal is to bring the library into all communities in Eastern Adams County,” she wrote.

Andrew Carnegie went to his reward in 1919, but he left behind a legacy of literacy. Hundreds of the libraries he paid for are still in operation around the world. And where there is a library, there will be people who read.

“Ultimately, the library is not a public library but a community library,” wrote Grimm.

Joel Martin may be reached at jmartin@columbiabasinherald.com.

Millie Hopkins, circulation manager at the Ritzville Library, stands behind the library’s counter in December. Hopkins has been with the library for about five years. 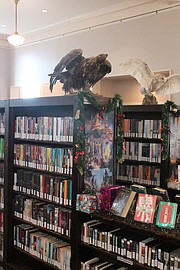 The shelves that house the books at the Ritzville Library are the same ones that were installed in 1907. The stuffed birds of prey that guard them are of more recent origin.