The game took place at the Democrats’ booth at the Grant County Fair. Contestants were invited to guess the number of candies in a jar. The container held 297 candies, according to an email from Grant County Democrats Vice Chair Jill Springer Forrest.

Leo Dabalos guessed the closest at 296. Dabalos won the jar of candy as well as a four-pack of Super Soaker water guns. Second place went to Clorissa, whose last name was not given. Third place winner was Logan Myers, fourth was Analia Valdez and fifth was Angelo Adams.

The contest garnered hundreds of entries and was a huge success, Forrest wrote. 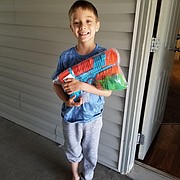