Color run for childhood health to be held in Othello

The Columbia Basin Health Association’s Run for a Cause will return to the Othello streets on August 27. The event hopes to raise money to help with the wellbeing of children and awareness of children's health issues.
CONTRIBUTED PHOTO/CBHA

The run already has 600 pre-registrations, surpassing the previous year’s totals. The run begins at 9 a.m. on Aug. 27.

Runners trek through colored powder wearing white shirts to catch the powder as they run. The bright result is part of the fun of participating in a color run.

OTHELLO – Now in its fifth year, the Columbia Basin Health Association’s Run for a Cause 5k Color Run will hit the streets of Othello, promoting health and wellbeing for children.

“We run for supporting and promoting childhood health and well-being in the community we serve,” Event Coordinator Courtney Martinez said. “We started in 2018.”

The run, which begins and finishes at the CBHA’s office at 1515 E Columbia St, has brought out close to 600 runners in prior years and has already surpassed that mark in pre-registration for this year’s run.

“We’ve had 600 people register as of (Thursday) morning, so we’re very excited,” Martinez said. “The weather is supposed to be great, and we’re really happy to do this event.”

The run raises money through a variety of methods, including registration fees, sponsorships and donations. Once the run is over, proceeds are counted and determined where they will go, Martinez said.

“In September we really focus on how we can give back what we’ve gotten, and give them back into the community in various ways,” Martinez said.

Proceeds will be given out to different entities with childhood health in mind.

“We will (divide) it out first to the Cure SMA Foundation, then we will give back to the three major cities that CBHA serves,” Martinez said. “The parks and recreation departments in the city of Mattawa, Othello and Connell.”

The parks and recreation departments were chosen to improve local parks.

“We give money to the parks and rec departments so that way they can give back to their parks and promote childhood health,” Martinez said.

Leftover money will go back to the CBHA’s Family Services department.

“With our money left over we will work with our Family Services department at the CBHA,” Martinez said. “They focus on families that are in more need.”

The run will head down East Scootney Street, Seventh Avenue, Main Street and 14th Avenue before ending at the CBHA’s Othello location. Throughout the course will be stations where runner’s shirts will become colored as they pass by.

“It’s a 5k course, it starts and ends at our main site Othello Clinic,” Martinez said. “Afterwards, people can participate in our activities – they can get food from our food vendors and have drinks with our food vendors, they can learn more about healthcare services from our education vendors. Our vendors really focus on healthcare.”

Registration is available online and in person on the day of the race, however, Martinez said it’s easier for those interested to sign up online.

“It’s a tighter window (on the day of), so that’s why we really push the pre-registration,” she said. “A little less stressful.”

Information about the run as well as registration information can be found at https://www.cbharunforacause.com/. The registration fee to run is $5, and runners can donate at the event as well.

“Hopefully we get a good amount of people on race day,” Martinez said.

Runners trek through colored powder wearing white shirts to catch the powder as they run. The bright result is part of the fun of participating in a color run. 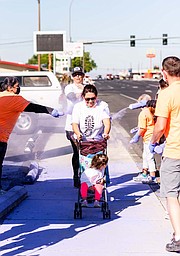 The run already has 600 pre-registrations, surpassing the previous year’s totals. The run begins at 9 a.m. on Aug. 27.