Up from the ashes

Jab Fitness owners Jonathan and Elizabeth Garza. The gym is reopening within the next few weeks, about a year after a fire that closed it.

The sign on the door at Jab Fitness is the only thing that survived the July 2021 fire intact.

OTHELLO — Jab Fitness co-owner Jonathan Garza said he smelled the smoke, but didn’t think anything of it at first.

Jab Fitness, 631 S. First Ave. in Othello, is a true family business, with most of the work done by Garza, his wife Elizabeth (Betty), their son Jonathan II and daughter Jade.

So it was part of the routine for the Garzas to come by the gym early, about 4 a.m., do some cleaning up and then do their own workouts. Both have other jobs, he said, Jonathan Garza for CHS, based in Warden, and Elizabeth Garza with the Othello School District.

They were following the routine one morning in late July 2021.

“There were probably two other people in here with us,” he said. “I started smelling smoke, and I just figured it was maybe the vacuum. And then one of the other members (said), ‘Hey, let’s get out. Let’s get out.’ All the vents started blowing smoke through the area.”

Jonathan and Elizabeth Garza were in the area of their business furthest away from what turned out to be a fire that started in the business next door. He walked over to the other side of the gym’s space, just to check it out.

“You could see fire coming out of that top vent,” he said.

The Garzas and their customers ran outside and called for help.

“By the time (firefighters) got here there were flames everywhere,” he said.

The fire damaged every business in the strip mall. The fire could’ve been the end of Jab Fitness, following the bumpy business climate during the COVID-19 pandemic. But it wasn’t. The Garzas decided to rebuild and are hoping to reopen by the middle of August, definitely by early September.

The Garzas are doing most of the work themselves. Jonathan, Elizabeth, their son and Jonathan’s dad Oscar were installing flooring in the space on the very hot evening of July 27.

“There was some insurance money, but it didn’t cover labor and putting (flooring) back in. So wherever we can save money and do it ourselves, we are,” he said.

The Garzas managed to salvage their business records before the fire got that far, but almost everything else was damaged, at least a little. While some of the equipment could be salvaged, the only thing that survived the fire intact was the Jab Fitness sign on the front door, Jonathan Garza said.

“There was over $150,000 of equipment in here,” he said. “We probably lost about 60 grand that we couldn’t salvage. And all the flooring, all that was lost.”

Jab Fitness is the family’s first experience with opening a business, and Jonathan Garza said they made a rookie mistake.

“Not knowing the business, I was insured for only (about) 25% of my value,” he said.

That wasn’t enough to pay back the loans the family had taken out to open the business, so they decided to rebuild.

“We’re confident. We were doing really well,” Jonathan Garza said. “Our bills were being paid, and basically this is just our lifestyle.

“It’s kind of a job. This part is a job,” he said, pointing to rolls of flooring still waiting to be installed. “But we love being with the people and working out.”

“This is a family business,” Elizabeth Garza said. “My kids come work here after school.”

The response from Jab Fitness customers was encouraging, both during the shutdowns required through the coronavirus pandemic and in the aftermath of the fire.

“The community supported us right away,” he said. “People showed up in numbers, and they call us every day - ‘When are you going to start? When do you open back up?’ So that’s what we’re doing.

“People called and said, ‘Hey, don’t worry, when you reopen we’re going to be back there,” he said. “Othello has been great.”

Jab Fitness opened in 2019, a way to fill a niche in Othello.

“I saw there was a need for it,” Jonathan Garza said. “The gym we were previously at started getting pretty packed. So I thought we could do it.

“It’s not your typical 24-hour fitness center. We’re very welcoming, and we don’t judge anybody,” he said.

“We don’t have any employees. It’s just the family,” he said. “Everybody does the cleaning, the signing people up, all that. Everybody is a janitor and a secretary.”

Back at the beginning it occupied one suite in the building, about 2,200 square feet.

“We did that for about a year, and when the people that were in (the adjoining suite) moved out, we asked if it was available and the owner said yes, so we just (expanded) this way,” Jonathan Garza said.

The expanded gym is about 3,600 square feet and the new section opened March 1, 2020. Businesses like Jab Fitness were closed down about two weeks later as a response to the pandemic.

Jonathan Garza said they survived the shutdown, in part with the help of grants and other support from the city of Othello, Adams County and the Othello Chamber of Commerce. And the gym customers responded enthusiastically when the gym reopened.

“People were excited to come back,” Elizabeth Garza said.

“And they wanted to be healthy,” Johathan said. “So we did really well.”

The fire was a setback, but the Garzas are coming back, and making plans for the future.

“The goal is to be here, eventually find a place on my own and build for myself. Have our own building,” Jonathan Garza said. 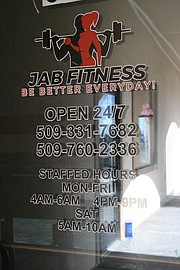 The sign on the door at Jab Fitness is the only thing that survived the July 2021 fire intact.

Jab Fitness owners Jonathan and Elizabeth Garza. The gym is reopening within the next few weeks, about a year after a fire that closed it.