Samuel Rebuelta, a senior at Moses Lake High School, is a goalkeeper for the boys soccer team. His coach says he is an incredible young man to have on the team.
Courtesy photo

MOSES LAKE - The Moses Lake High School boys soccer team goalkeeper, senior Samuel Rebuelta, is a great leader, head coach Derrick Gonzales said. However, the senior is not just a great leader on the field, but off the field as well.

“He’s a young man of incredible character and having him back as the keeper, looking out for everyone, especially our younger guys who need a little bit of extra support and encouragement, gives me chills just talking about it,” said Gonzales.

Rebuelta’s name may ring a bell because he was recently awarded a full ride scholarship to Vassar College in Poughkeepsie, New York.

Rebuelta will attend Vassar beginning in the fall, with a full ride scholarship. He said QuestBridge officials estimated the scholarship, which includes tuition and room and board, will be worth about $300,000 if he attends all four years.

Rebuelta said he first got into soccer when he was in the first grade. He said his cousin was into soccer and wanted to shoot some goals so he put Rebuelta as the goalie for him to practice his shots against. From fourth to seventh grade Rebuelta played on the same team as his cousin and then moved on to middle and high school soccer. Rebuelta said that, although he wanted to, he was not able to play any club soccer due to the expense. It wasn’t until Rebuelta got a job that he saved up the money to play on a club team while in high school.

Rebuelta works tutoring other students after school. He said he enjoys tutoring because he likes helping others and learning new things from them.

“You can really learn a lot through others. I’ve learned so much from the people I’ve helped,” Rebuelta said.

When asked how he balances school, sports, work and home, Rebuelta said he uses a planner. He also noted that he uses the Pomodoro Technique - a time management method where work is done in focused 25-minute intervals - and takes advantage of any little bit of time he has. .

“(Rebuelta is) just an incredible young man who’s giving a lot for his team every day in a very humble way,” Gonzales said. “Overall, I’m just so proud to be able to be a part of his senior season.”

Rebuelta has many parts he enjoys about soccer but he said his favorite is just playing with his team, whether that’s at practice or during a game.

The team is 4-6 overall so far this season.

He also said he didn’t realize he was a leader until earlier this year when people started to say things to him about being a leader and asking him for advice. He said he felt like he was just paving his own path and didn’t realize anyone was watching and following his lead.

Rebuelta said his biggest inspiration is his mom. He said that his mother is an immigrant to the United States, has had little formal education and is more recently just learning English.

“If she can do that, I can do anything,” Rebuelta said. “And I’m going to make her journey to the U.S. worth it.” 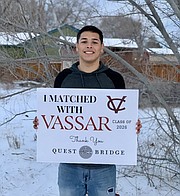