Rep. Tom Dent, R-Moses Lake, in his office at his hangar at the Moses Lake Municipal Airport, begins an online meeting with other legislators to talk about the ongoing drought.
Charles H. Featherstone/Columbia Basin Herald

The 13th Legislative District map as it currently stands.

MOSES LAKE — Big changes are potentially in store for the Columbia Basin as the four voting members of the Washington State Redistricting Commission have released their draft maps redrawing the state’s legislative boundaries.

In all four proposed maps — from Democrats April Sims and Brady Piñero Walkinshaw and Republicans Paul Graves and Joe Fain — the 13th Legislative District changes significantly, with adjustments varying from stretching the 13th Legislative District all the way to King County in Graves’ proposal to shrinking the district and centering it on Kittitas and Yakima counties and divvying up Grant County among three separate districts — the 12th, 15th and 9th — as proposed by Walkinshaw.

“This is the beginning, just know that,” said Sen. Judy Warnick, R-Moses Lake. “But there could be some real major changes.”

Warnick said the changes were necessary because the huge population increase in the Puget Sound area will force the state to rebalance how the state’s districts are drawn.

“There are so many people on the west side, it’s going to be difficult to balance the numbers and create competitive districts,” she said.

Even with the growth in the region over the last 10 years, Warnick said the 13th Legislative District must add 6,500 more people.

“That’s a challenge,” she said.

“Some of this is not going to work,” Warnick said.

According to Jamie Nixon, a spokesperson for the redistricting commission, over the next two weeks, commissioners will give comments and suggestions to allow them to draft a final map, which must be approved by three of the four commissioners.

The final map must be ready by Nov. 15, after which the state legislature has the ability to amend it by a two-thirds vote if it chooses. The new boundaries will become law in mid-December if unchanged by the legislature, Nixon said.

The new boundaries would then come into effect in the 2022 election.

“We’re hopeful this will allow negotiation and debate to guide what the people of the state want,” he said.

The process was rushed this year because the U.S. Census Bureau was late in getting the data to the state, Nixon said.

Warnick said she and Dent are working with Rep. Alex Ybarra, R-Quincy, on their own map to retain the district’s rural character and add the needed population.

“We’re putting together what we think would work as a map,” Dent said. “We want to keep the district intact. But we will lose something, and we will gain something.”

“We’re counting on him,” Warnick said of Ybarra. “We would like to stay representing the 13th District and not represent King County. How we get that accomplished, I don’t know.” 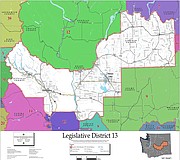 The 13th Legislative District map as it currently stands.