‘A second family to me’: Volunteer firefighter finds her service rewarding

Emily Collins, volunteer with Grant County Fire District 5, said the chance to help the community and the camaraderie among the firefighters make it a rewarding experience.
Cheryl Schweizer/Columbia Basin Herald

Grant County Fire District 5 personnel attack a fire during a training exercise. Volunteers make up most of the district’s firefighting crews.

Collins is a volunteer firefighter for Grant County Fire District 5, joining the department in early 2020. Volunteering with the fire department can be challenging, she said, but it’s much more rewarding.

“I love everybody at the fire department. They’re just like a bunch of brothers, and uncles, and dads. It’s just one big family there,” she said.

Like many rural fire departments, most of the district’s firefighters are volunteers. The district has 12 paid staffers and 84 volunteer firefighters, according to district officials, who didn’t know how many were women.

Collins got interested in her volunteer job as a result of her former day job.

“I started in EMS about four years ago,” she said. “And I wanted to pursue something different, kind of add to my credentials and try a different (experience). My dad was a volunteer firefighter with them (GCFD 5) when I was younger,” she said.

She worked for American Medical Response in Moses Lake for three years after getting her EMS certification, she said. Currently she works for Medcor, a company that operates first aid clinics and tracks occupational safety compliance for businesses. She’s part of the Medcor staff working at Genie, she said.

Volunteering at GCFD 5 allows her to get the training needed to keep her EMT certification, she said.

“I decided to join the recruit class,” she said.

Her experience as an EMT, as well her dad’s time on the department, gave her an insight into firefighting, she said.

“Put the wet stuff on the red stuff. That’s kind of the basics of it,” she said.

But getting the wet stuff on the red stuff requires a lot of training, down to learning how to breathe while working a fire scene. Firefighters wear self-contained breathing apparatuses while they are in close proximity to the fire, all the while carrying heavy equipment.

“It’s almost like you’re doing weight lifting while wearing a breathing apparatus. The harder you breathe, the faster the oxygen goes through, so you really have to control your breathing the entire time,” she said.

“Nine times out of 10 when you go in those burning buildings, it’s dark. There’s not a lot of light,” Collins said. “So you’re feeling (the way forward), you’re using your voice and feel instead of vision. So going back to your breathing is a really good way to bring you back to center.”

Firefighters learn to depend on each other at a fire scene.

“When we go into fires, we crawl on the ground. Then we have our right or left hand on a wall, and our other hand is sweeping the area to try and feel where we are and what’s going on,” she said. “You have your lead, who’s going to tell the person behind them, ‘pull to your left,’ or ‘wall ahead,’ things like that. You really have to trust the person in front of you.”

It’s a physically demanding job, and Collins said she has had to figure out what she can and can’t do.

“The first house fire I went on, I realized, when it came to pulling roof and things like that, I’m not tall enough. So I find other things (to do),” she said.

“You do find out really fast (that) physically it is a lot of work, and you want to make sure that you’re in shape,” she said.

She cited the case of a fire on Easter Sunday.

“All of us had to leave our families to go fight that fire,” she said.

So it’s important to have a good support system at home, families who understand firefighters have to answer the call when it comes, she said.

GCFD 5 volunteers have other jobs, and in most cases employers allow the volunteers to answer fire calls during work hours, she said.

Even though it’s challenging Collins said she would encourage women to volunteer.

“It’s very rewarding to give back to the community you grew up in,” she said.

“The one thing I love is knowing that every time I walk into a fire, that I have six or seven of the guys that have my back. In any situation we walk into, I have a whole bunch of big brothers standing behind me, to help me do whatever I need to do,” she said. 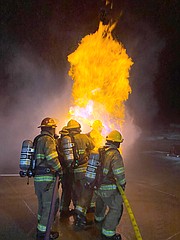 Grant County Fire District 5 personnel attack a fire during a training exercise. Volunteers make up most of the district’s firefighting crews. 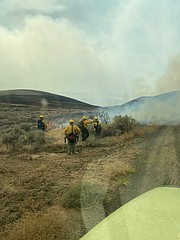 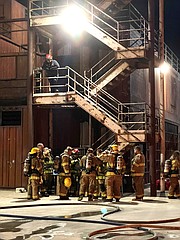