Brews and Tune-IN baskets included snacks, bingo cards to downtown businesses, tasting glasses, and a wide selection of beer and a ticket to Saturday's virtual concert.

Wenatchee based musician Rylei Franks plays for the Brews and Tune-IN event on Saturday.

It was important to keep all of the aspects people love about the in-person event, said Lexi Smith, business association executive director. It took some creativity to make the digital event just as engaging, she added.

This included providing baskets with snacks, bingo cards to downtown businesses, tasting glasses, and of course a wide selection of beer and a ticket to the virtual concert.

“It’s not the same over Zoom, but it’s close and it works,” Smith said. “We’re able to still do a lot of the same traditions and same things at Brews and Tunes that people love so much, which is having all these different breweries in one place and being able to taste all these different kinds of beers.”

Rick Serra, the event’s emcee, kicked off the night with Pullman brewery Paradise Creek’s Huckleberry Pucker Shandy and Over The Hop IPA.

Next came the acoustic beach stylings of local band One Soulution from the comfort of a dining room colored in concert lights and homemade posters.

About 45 muted attendees tuned in, inundating the chat box with all-caps cheers and clapping emojis.

Last but not least was Moses Lake’s own Ten Pin Brewing Company’s Head Pin IPA and Groove Pineapple Wheat Ale, the latter of which was a collaboration with local groove reggae rock band Dimestore Prophets, who closed out the night.

DSP, performing on the second floor of Ten Pin, broke up their Sublime and Michael Jackson covers, old originals and new songs with jokes and virtual hugs, even freestyling about Brews & Tune-IN and Moses Lake over Buffalo Springfield’s “For What It’s Worth.”

Post show, the band felt on top of the world, said DSP lead singer Ray Glover. The digital audience didn’t hold them back at all.

“The whole thing about us three is, like, we get to hang out together and play music and then at least seeing people’s faces. That’s super important,” said drummer John Wilson. “Would I have rather smelled (the crowd’s) bad breath? Probably. I don’t know. But it was cool to see everyone. It was awesome.”

Smith said she considers her first Brews & Tune-IN a success, she said, and is determined to keep that energy throughout the year.

“We’re still going to see each other whether it’s virtually or social-distanced or however we’re going to do it,” she said. “It’s going to be an innovative year, and we’re going to find a way to be able to do all of our events no matter what.” 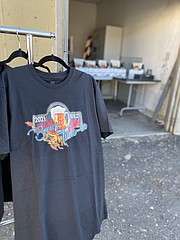 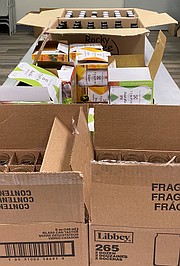 Brews and Tune-IN baskets included snacks, bingo cards to downtown businesses, tasting glasses, and a wide selection of beer and a ticket to Saturday's virtual concert.

Wenatchee based musician Rylei Franks plays for the Brews and Tune-IN event on Saturday.