Sharon Winningham, front, directs the cast of “The Dining Room” on stage during rehearsals in the theater at Moses Lake High School this spring.
Janae Hone/courtesy photo

Moses Lake High School drama adviser Sharon Winningham looks around the empty stage in the high school theater as her first year with the program comes to an end.

Sharon Winningham, sitting in the theater seats at the Moses Lake High School theater on Tuesday afternoon, reflected on her first year as drama advisor with the high school.

MOSES LAKE — The past year would be an interesting time to step into a new role in any facet, including the performing arts.

Moses Lake High School drama advisor Sharon Winningham recently discussed the challenges and successes she found as drama advisor in her first year and how the experience of navigating the past year will help shape her future plans with the program.

She was the assistant director for the school’s production of “Grease” before directing “Footloose” in fall of 2019. She performed as an actor with Basin Community Theater and Masquers Theater before taking over for Sabrina Haesche at the high school last fall.

While she wasn’t anxious or nervous, Winningham said she did have some feelings of being overwhelmed early on in the new role.

“At the same time, the only pressure to do a performance was self-generated,” Winningham said. “The district had no expectations at all, but I knew if I wanted my program to grow, I couldn’t just take a year off and pick up from nothing.”

Winningham was able to get the typical two performances in this year in spite of the restrictions in place, with a radio show performance of “A Christmas Carol” in the winter and a vignette show, “The Dining Room,” in the spring.

While she said musicals are some of her favorite performances to put on, it was nice not having one to deal with as she adjusted to the new position.

She said the radio show was definitely a compromise given the circumstances with COVID-19 and turned into an interesting experience. She said it was tough not having the audience feedback with the radio show, being accustomed to live performances, but it was better than nothing.

“With the radio show, I was thinking all the way outside the box; I couldn’t even see the box,” Winningham said. “It was so far outside anything I’d experienced. Thank God for my technical director for knowing what needed to be done because there’s no way I could have pulled that off by myself.”

Moving into the spring, Winningham said the performance of “The Dining Room” was planned to be outside until regulations eased, allowing for performances on stage. Winningham said it was wonderful finally being back in that live theater environment, for herself and the students.

“It was when the kids started wearing their costumes and the difference that makes in the performance level, the connection they start to make with their character,” Winningham said. “That’s one of the magic moments that happens in live theater that didn’t happen in the radio show.”

The smaller cast for the vignette show made the process of putting together the spring show a lot smoother, especially with five actors who had never done a live performance before, Winningham said.

After wrapping up her first year with the program, Winningham said she’s left with just feelings of gratitude.

“I’m so thankful that I’ve had the opportunity to do this, and theater has been hugely important to me; and to be able to pass that on and really give back to the community that’s given me so much is great,” Winningham said.

In a weird way, she said she’s grateful for the COVID-19 year, which gave her some time to figure out the ins and outs of the position without all of the typical responsibilities that come with the job.

She’s planning on another Christmas show in the winter, with hopes of getting some elementary-age kids involved. Winningham said she’s looking forward to growing her program and hopefully “lighting the fire” for some young performers in the process. She said once someone does theater once, they tend to never let go.

She also said she’s looking forward to her first musical as drama advisor, something she enjoys a lot and the community tends to have a lot of fun with.

Winningham grew up in a small logging community in western Montana, where her only theater performances came when the Missoula Children’s Theater came to her school. But now, she said she’s excited to be a part of spreading her love for the theater to the next generations in a community that has welcomed her with open arms.

Sharon Winningham, sitting in the theater seats at the Moses Lake High School theater on Tuesday afternoon, reflected on her first year as drama advisor with the high school. 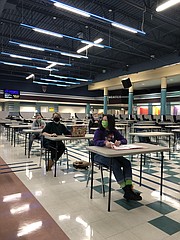 Moses Lake High School drama adviser Sharon Winningham looks around the empty stage in the high school theater as her first year with the program comes to an end.