Dimestore Prophets and Tunes at the Dunes mastermind John Wilson jams on a pontoon boat on Sunday.

MOSES LAKE — On dunes covered by ATVs and water covered by ski boats, there was plenty of movement and music Memorial Day weekend. But on Sunday, one boat stood taller and played louder than all the others.

“Memorial’s a day about appreciation and showing appreciation, so that’s why we do it,” said Ray Glover, Dimestore Prophets lead singer.

“Annual” is used loosely. Storm clouds and ugly weather canceled the 2019 show, then a pandemic squashed the following year.

After two years of no live tunes at Moses Lake’s south end, Glover expected the 2021 concert to be “popping off,” he said.

With Hansen’s pontoon boat backed up to shore, nearly 100 boats, jet skis and floaties, plenty of cheers and a handful of American flags arranged like a drive-in theater.

“Out on the water, it’s complete freedom,” Glover said.

Throughout the show, transients slowed their engines and came and went. The Prophets played a wide array of cover tunes -- Sublime, Tom Petty, Jason Mraz and plenty of originals, a carefully curated setlist of summer bangers.

Tunes at the Dunes’ inception actually predates Dimestore Prophets, Glover said. Putting a band on a boat at the south end was something drummer John Wilson wanted to do for years.

The first year, they set up on a tiny Bayliner, Glover said. It was crowded, even with Wilson’s small drum kit.

The following year, they set up on a fire rescue pontoon boat, and it’s grown ever since, he said.

This year had a better sound system, pushing more waves across the lake.

Their new position formed an informal mosh pit as well. Glover called it the “kiddie pool,” where folks could leave their boats and come up closer in floaties.

With praises to summer, Moses Lake and music – and a few curses toward COVID-19 – this was the biggest year yet, Glover said.

“This is Dimestore Prophets’ way that we want to give back to the community with a free show, a really cool venue and just show our appreciation for all of the support and all the love that the community has given to us over the last decade,” he said. 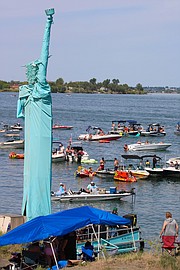 Dimestore Prophets and Tunes at the Dunes mastermind John Wilson jams on a pontoon boat on Sunday.