Wrapped up in history: Royal City quilter sews her story

ROYAL CITY — “Quilting, if you like it, you get excited since the moment you start choosing the fabric,” said Sandra Cortes-Medina, chair of the Royal City Summerfest Quilt Show, which took place July 10.

Cortes-Medina grew up in Chile, where she learned to knit and crochet. Attending an all-girls school, those types of skills were valued, she said.

She eventually ventured off the beaten path, though. She went to college for nursing and came to Royal City in the early ’90s without speaking any English.

Her husband told her the best way to learn to speak English was to be around English-speaking people, she said. That’s how she met her community at St. Michael the Archangel Catholic Church, and that’s how she found quilting.

Everything about it fascinated her, she said, from the techniques, to the end result, to the rich history.

“You have no idea how much I’ve learned from the American history of quilting, and how many friends I’ve made also,” she said.

According to the Quilting in America website, quilting-in-america.com, quilts first came to North America with English and Dutch settlers out of necessity. Because many settlers didn’t have much money, they didn’t discard things when they wore out.

Clothing, blankets and sheets became patches for quilts with the simple need to keep warm. Later, this became a folk art: creating patterns and designs to tell a story or encapsulate a memory.

According to the Smithsonian, quilts indicated safe houses along the Underground Railroad with coded messages. For example, bow ties could mean to dress in disguise to appear in higher status. Bear paws could mean to follow animal tracks to find water and food. Log cabins could mean to seek shelter, or the people here were safe.

The Royal City Summerfest Quilt Show started around 2013, Cortes-Medina said. Quilters from all over the state show their quilts.

Even people from out of state who can’t make it to the show will send in their quilts just to display, she said. This year, there were 31 quilts.

Over technique, the most important aspect of the quilt is its story and history, she said. Many quilts become family heirlooms, passed down generation to generation with the tradition of quilting itself.

Cortes-Medina was the second winner, she said. Her quilt, with colorful two-inch patches in rows of musical notes, took her 15 years to make.

It’s dedicated to her son, she said, who is a musician. While he plays many instruments, his favorite is the guitar. He has more than 30 of them.

She started the winning quilt in 2006, she said, when he was a high school senior. Each of the patches was made from fabric from Hawaii, with hints of his daughter’s nicknames, where he’s been and where he may go.

The musical notes also represent her three granddaughters, she said.

By each note is a red “comma,” she said, just like in sheet music, meaning rest and breathe.

“That’s the kind of quilts we show,” she said. “They tell a story.”

Quilts are often gifts, she said. They often represent something very sentimental.

It starts with leftover fabrics, she said. Cortes-Medina always makes her designs from scratch, never a pre-made pattern.

The measurements take a lot of work, she said.

“There’s a lot of math,” she said. “People are not aware, but the ones that are good quilters, they are really good for math.”

Once the top design is finished, it’s sandwiched to layers of fabric underneath, she said. The back of the quilt is often a single piece.

Some cultures still make traditional quilts without any machines, she said. These can be worth thousands of dollars. Beyond that, the whole community gathering to share their stories and display their work creates a special moment, she said.

“To see their faces and to hear their stories of what they did throughout the year, it’s very epic,” she said. 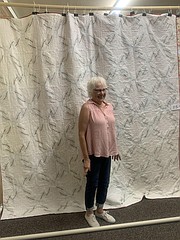 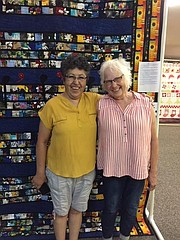