Conner was born in Yakima, Washington, to Patrick and Danielle (Fleury) Boss, but soon moved with his parents to Moses Lake in the fall of 1996. His early childhood was filled with all the fun activities in the area including playing at the Aquatic Center, playing T-ball, and swimming and boating on Moses Lake. His sister was born in October of 1998 and Conner was very proud to be her big brother. Conner made many friends at the BBCC Co-op Preschool, Children are Special, North Elementary and later Peninsula Elementary. During his youth he enjoyed camping with family, playing soccer, basketball, and performing in nearly every Missoula Children’s Theater Production that came to Moses Lake from kindergarten through eighth grade.

Conner was also treated to many fun trips with the family and was able to travel the world. At about the age of 6, Conner showed a real interest and talent for the piano which grew with him during his years at Frontier Middle School and Moses Lake High School (MLHS). Conner excelled at music (both piano and drums) and was part of the jazz band and jazz choirs during his time at MLHS, played piano at Disneyland with the band, and won the MLHS Talent Show in 2011. Conner played jazz piano at many local venues including the Mrs. Washington Pageant, Columbia Basin Allied Arts, Imbibe, Beaumont Cellars, Cave B Winery, Real Deals, Moses Pointe and at several events with Lake City Blues. After graduating in 2013, Conner achieved one of his greatest ambitions, which was to attend the Berklee College of Music in Boston, one of the top music schools in the United States. Unfortunately, his time there was cut short at Berklee, as his struggle with addiction became evident.

Over the next several years, Conner would attend several substance abuse treatment centers and lived in many different sober living houses in Utah, Washington State, Oregon, California, Colorado and Florida. When he was doing well he worked, attended community college, wrote music and continued playing piano professionally. Conner also loved watching college basketball games with his dad. He was a huge fan of the Gonzaga Bulldogs, and attended many Gonzaga basketball games across the country with his father.

His latest adventure was a move in October to Fort Myers, Florida, where he was living in a sober house with a longtime friend. He got off to a promising start, working at a downtown restaurant and playing piano at several art exhibitions at the Sydney & Berne Davis Arts Center, but Conner’s life came to a tragic end in the early morning hours of Dec. 5, the result of an accidental overdose.

Conner is survived by his parents Patrick and Danielle and his sister Caitlin of Moses Lake; his grandparents Keith and Delores Boss of Yakima; his grandparents Peter and Carol Fleury of Cathlamet, Washington; aunt Kim Karg of California; uncle Terry Karg of New York; first cousins Courtney Karg of Pennsylvania, Haley Karg of Colorado and Jody Karg of New York, and many second cousins and friends around the country.

A Memorial Service is scheduled for Jan. 8 at 2 p.m. at Kayser’s Chapel of Memories in Moses Lake and will be live streamed via Facebook Live at https://www.facebook.com/Kaysers-Chapel-of-Memories-104201534614825 with a reception to follow from 3-6 p.m. at the Elks Lodge on Stratford Road in Moses Lake. The family would like to thank the many people who mentored Conner through the years and the very many people who have reached out to us during this time of unimaginable grief. Your kindness has touched us profoundly.

Please express your thoughts and memories for the family at www.kayserschapel.com. If you or someone you love is struggling with addiction, please reach out to the National Substance Abuse Hotline at 1-800-662-4357. 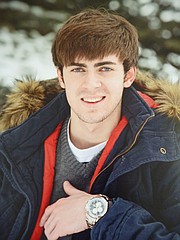