Legendary wrestling coach Ruben Martinez shakes the hand of sophomore Dominic Martinez after his match at the Leonard Schutte tournament.

Martinez coached at Othello High School for 23 years after taking over the head coaching job in 1995. During his tenure, Martinez led the Huskies to two team state titles, 16 individual state titles and 150 dual wins.

Martinez most recently was the head wrestling coach for Kiona-Benton City High School.

Current and former coaches from the Othello High School wrestling community reflected on Martinez and his impact in Othello.

Hall of Fame head wrestling coach Wayne Schutte first met Martinez when Schutte was teaching and coaching at the junior high and Martinez was an eighth-grader. After taking over the head coaching job the next year, Schutte had the chance to coach Martinez all four years in high school.

Martinez won a state title his senior year under Schutte after finishing as a runner-up his junior year. Schutte said he was a good technical wrestler, but it was his relentless willingness to never give up that made him special.

“He was really a team-focused individual; he was well liked within his team by players and coaches and also by opposing coaches,” Schutte said. “Ruben always had that smile that was contagious.”

After graduating from Othello High School, Martinez went on to wrestle at Eastern Washington University for a year before taking some time off. After a former Othello wrestler landed the head coaching job at the University of Montana, Martinez returned to the mat to finish his collegiate career and join the Montana coaching staff briefly after graduating.

Martinez had a few coaching stops before returning to Othello as an assistant coach for Schutte in the mid-’90s. With Martinez back in the fold, Schutte said he finally felt like it was a good time to step down as Martinez took over in 1995.

Coming with collegiate wrestling experience, Schutte said Martinez brought in an intensity, knowing what it took to become a champion. He said Martinez helped continue the strong wrestling condition that was built in Othello and the expectations.

Hall of Fame coach Mark Kondo started in Othello as a counselor in 1993, and first met Martinez when Kondo was a Spanish teacher. After taking over the OHS athletic director position a few years later, Kondo hired Martinez as head wrestling coach, and served as an assistant coach with Martinez for a number of years.

The thing that stands out to Kondo about the former head coach is his willingness to never turn a kid away.

“He was always willing to help students in the classroom and that same care for individuals carried over into the wrestling room,” Kondo said. “He always cared about kids and it was never about winning state championships or league titles. It was about helping kids learn to work hard, learn to be responsible and have dreams and dream big.”

Kondo said Martinez often saw potential in kids they didn’t see in themselves, a devotion that came from his own former coach, Schutte, seeing the same potential in him.

When Martinez took over for his former coach, Kondo said there was an obligation Martinez felt to continue.

“Without Wayne’s influence, he might not have ever gone on or thought about going to wrestle in college,” Kondo said.

The impact Martinez has had on Othello can be seen not only in his former wrestlers, but in their children, as well. His desire was to impact young people the same way Schutte had impacted him: by helping them live responsible, healthy lives.

Othello assistant wrestling coach Sammy Rocha graduated from Othello High School in 1993, Martinez’ first year as an assistant. After graduating, Rocha went on to coach at Connell High School for a few years, but said he still always felt like Schutte and Martinez were his head coaches.

While Schutte is his father-in-law and someone he turns to for advice often in wrestling, Rocha said Martinez would always reach out to him.

“Ruben would always call me and ask how things were going,” Rocha said. “I’d say I was struggling with this part of practice or something and he’d always be there with, try this or try that.”

Rocha said his decision to leave Connell and return to Othello was led by his desire to grow as a coach under Martinez.

Jay Breckenridge is a longtime friend of Martinez and has followed a close parallel in his career since high school. Both Breckenridge and Martinez won state titles the same year before going to Eastern Washington University to wrestle together as freshmen, where the friendship took root.

After college, both went on to coach in high school, “pounding against one another” for years, Breckenridge said. Both ended up in smaller towns, with Breckenridge coaching for most of his career at Sedro-Woolley High School. And to cap it all off, both were inducted into the Washington State Wrestling Coaches Association Hall of Fame the same night.

“Ruben and I were identical as wrestling guys; we’d ask for the moon out of our kids,” Breckenridge said. “But our kids knew we had their back no matter what they got into. And between his boys and my boys, they got into everything.”

Breckenridge said Martinez was like a “rock that couldn’t be moved” within the wrestling community. He remembered back to the night both were inducted to the Hall of Fame and Martinez talking about his mother’s impact.

“His admiration for his mother to get him here as a kid and all they went through; it’s incredible the passion he has for family,” Breckenridge said.

Current Othello wrestling head coach Rudy Ochoa II took over for Martinez after wrestling for him in high school. Ochoa said Martinez impacted him more than he can really put into words.

“He taught me so much more than just about the sport of wrestling,” Ochoa said. “Being around him, you could tell he genuinely cared and that is a rare trait in people. I’ll miss him so much, but am forever grateful for all he has done for me.” 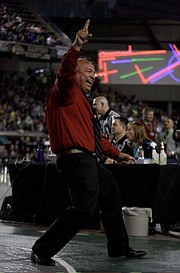 Legendary wrestling coach Ruben Martinez shakes the hand of sophomore Dominic Martinez after his match at the Leonard Schutte tournament. 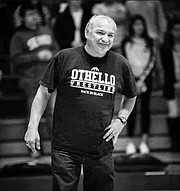