Riverdogs 15U knocked out of Babe Ruth Regional Tournament

Cruz Martinez slides into the base for the Columbia Basin Riverdogs 15U team at the Pacific Northwest 13-15 Babe Ruth Regional Tournament in Kelso, Washington last week.

The Riverdogs finished pool play during the week at 3-1, but fell 11-1 to Camas-Washougal in the first game of the knockout round.

After beginning the week 2-0, the Riverdogs lost 8-0 to the host team July 28. Riverdogs head coach Jaime Vela said the Kelso team was a bit more mature, both age-wise and size-wise, and he knew they were going to be a team to beat.

After a bye on July 29, the Riverdogs won a nail-biter against Glendive on July 30, 14-13, to advance to the weekend. Holden Koziol finished 2-3 from the plate to lead the team.

On Saturday, the Riverdogs found themselves behind early, trailing 6-1 after two innings, and were unable to recover. Cody Roetcisoender led the team at the plate finishing 2-3 with one double.

Coach Vela said it was a collective effort from his team to make it to Regionals.

“Everyone sort of just did their job,” Vela said. “We don’t need to make the web gems, if we can make the routine plays consistently, we’ll be OK.”

Koehn Lyons swung the bat well for the team, coming a long way from where he was at the start of the season, Vela said. Jackson Carlos made the move from the infield to the outfield and excelled thanks to his speed.

Vela said Carlos is one of the few players on the team with the “green light” to steal while base running. Anson Gustafson was a force for the Riverdogs all year, Vela said, and a “vacuum” at shortstop.

With 13 players coming back for the 15U team next year, Vela said he’s ready to make another push for the World Series.

“I see a lot of potential in so many of these kids, I’m just really excited to see what the future holds moving forward,” Vela said.

The growth in athletes around 12, 13 or 14 years old is fairly significant, with one year making a pretty big difference, Vela said, and giving these players another year to grow, physically mature and build muscle will only make the team more formidable next summer.

“This year, I think we were a little behind the older teams we played, not necessarily mentally behind, but maybe physically behind,” Vela said. “Being able to grow, I think is just going to make us a better team.”

Cruz Martinez slides into the base for the Columbia Basin Riverdogs 15U team at the Pacific Northwest 13-15 Babe Ruth Regional Tournament in Kelso, Washington last week. 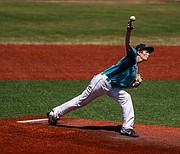