Mya Martinez of Moses Lake holds up her First Place medal from the Class A 10U National Championship tournament in North Mankato, Minn., on Sunday morning at Larsen Playfield.
Casey McCarthy/Columbia Basin Herald

Mya Martinez and her dad, Ray Martinez, pose for a photo Sunday morning at Larsen Playfield in Moses Lake with Mya wearing her medal from the Class A 10U National Championship tournament in North Mankato, Minn.

Martinez didn’t let the rain slow her down Sunday morning as she hit the softball field at Larson Playfield with her dad for some training reps. She spent the majority of her summer playing with the Washington Angels Fastpitch team out of Tri-Cities before being invited to join the Spokane Epic for the tournament.

The Angels and Epic faced off about six times this summer, giving the Spokane club plenty of time to see Martinez in action. When their shortstop was unable to attend, Martinez got the call to see if she’d be able to join the club for the tournament.

Martinez finished the tournament with a batting average of .559 and 19 hits in total, including three doubles, four triples and a home run. She also racked up 18 RBIs, 23 runs earned and 18 stolen bases.

Martinez said she’s been playing softball since she was about 4 years old. She said her goal is to play softball for the University of Washington. During her time with the Washington Angels, the team won both the National Softball Association and USA Softball of Washington State Championships.

In her first summer playing travel softball, Martinez said it was a busy schedule to keep up.

“We came home and then we had to start packing again, just a lot of moving around,” she said.

Earning three championships this summer has been pretty special, she said. Now, she said, it’s just back to training ahead of the fall season kicking off in just a few weeks.

Ray Martinez, Mya’s father, is the person she said has been her biggest influence. Ray Martinez said her growth this summer has been tremendous.

Ray Martinez said his daughter’s coaches called her the team’s “spark plug,” providing energy when the team needed it. He said she might not be the biggest player on the team, but she plays with a lot of heart.

Martinez said the Spokane Epic want Mya to play on the team next summer, but she’s sticking with the Angels for now.

Mya’s 12U team already has about six tournaments lined up this fall, he added, with practices beginning in a couple of weeks. 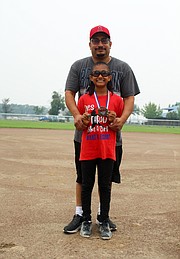 Mya Martinez and her dad, Ray Martinez, pose for a photo Sunday morning at Larsen Playfield in Moses Lake with Mya wearing her medal from the Class A 10U National Championship tournament in North Mankato, Minn.