Sarah Schutt and her father Scott pose with one of their portable hand washing stations, which they haul out to wildfires to help give fire crews a chance to clean up.
Charles H. Featherstone

Firefighters at a SISS hand washing station during the Carlton Complex Fire in 2014.

Sarah Schutt and her father Scott pose with one of their portable hand washing stations, which they haul out to wildfires to help give fire crews a chance to clean up.

The inside of one of SISS's hand washing stations.

A hand washing trailer at the 2014 Carlton Complex Fire.

EPHRATA — The decals on the rear ambulance windows convey a clear message:

“It helps to have a couple of old ambulances,” said Sarah Schutt. “They can haul things, and you have a place to sleep out of the elements.”

The gravel crunches underneath her feet as she walks between vehicles — a couple of old ambulances, several large trucks with giant water tanks on the back and a few silver, boxy trailers. She’s showing off the equipment she and her father Scott own as part of their Ephrata-based business, SISS, which provides cleaning and washing-up services to firefighters combating brush fires.

Which means that summer can be busy time for both Schutts, driving hither and yon to whatever wildfire is raging, as well for the handful of college students who help staff the hand washing stations in the field.

“We have hand wash trailers, that’s primarily what gets sent out,” Sarah said. “They are fully self-contained, they run off generators, and there are guys who deliver potable water out there.”

The four trailers have 16 sinks each — eight on each side — and hold 300 gallons of potable water and another 500 gallons of “gray water” that can be used for washing but isn’t safe for drinking. In addition, the Schutts have two giant water tankers — one capable of carrying 1,600 gallons — and the aforementioned ambulances.

The hand washing stations give crews fighting some of the massive wildfires we’ve seen in the last few years a chance to clean up a little before taking a break or going to sleep.

The Schutts have been providing wash-up stations for firefighters for 14 years now, ever since Scott said he saw a friend of his do it and decided it was something he could do too.

“So I went about building some stuff, and shortly after that Sarah got involved in it,” Scott said. “And then we built more equipment and added more things. You know how it goes, one thing leads to another.”

Scott said he’s even built a trailer with showers for firefighters, but they’ve not had an opportunity to deploy that one yet.

When a wildfire is reported somewhere in the Northwest, Sarah said they will either get a call from the U.S. Forest Service or they will put their services up to bid. If the bid is accepted, they will haul out one or more hand washing stations to the fire incident command center, set them up where directed, and then head back home.

“We’ve got several awesome collage student employees who work for us in the summer, so they meet us out there,” she said. “We set them up with a tent and then we head home. Usually, sometimes we’ll stay with the equipment, but sometimes we head home and take more stuff out.”

“We’ve had as many as three or four pieces of equipment on a single fire,” Scott said. “We have four trailers and two potable water trucks, so you know you could find yourself at two or three different fires at one time. And we have.”

Jess Munter, who met Sarah at Big Bend Community College, is one of those “awesome” college students who joined the SISS crew in 2018.

“I was getting ready to move to Bellingham and looking for a job when Sarah offered me this gig (during one of) our jiujitsu classes,” she said. “It was so much fun, I decided to continue with it this season.”

Munter staffed a hand washing trailer in late summer near the White Pass Ski Resort to assist firefighters during the Cold Creek Fire.

But for all that, Sarah said this year was not a very busy fire season for them.

“Toward the end it got a little busier, but it was kind of medium busy,” she said.

Because it’s seasonal work, both Sarah and Scott have regular, full-time jobs. She is a student activities program assistant at BBCC and he puts up highway signs for the Washington State Department of Transportation. Sarah and Scott say they save their vacation days for the summer, when the fires hit, though lately competition providing services to fire crews has, so to speak, heated up.

“Competition has become pretty stiff for this type of stuff, so we weren’t as busy (this year) as we would have been five years ago,” Scott said. “There’s 28 of these sink trailers in the state alone.”

They also don’t have much use outside of disasters, Scott added, so they don’t worry about deploying their sinks and tanker trucks and even ambulances outside fire season.

“It’s a specific thing for firefighters and other disasters. We went on a windstorm where a bunch of power was knocked out for the Colville tribe,” Scott said. “Mainly disasters.”

A hand washing trailer at the 2014 Carlton Complex Fire. 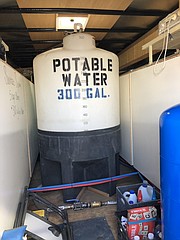 The inside of one of SISS's hand washing stations.

Sarah Schutt and her father Scott pose with one of their portable hand washing stations, which they haul out to wildfires to help give fire crews a chance to clean up.

Firefighters at a SISS hand washing station during the Carlton Complex Fire in 2014.