The right time, the right place: An off-duty volunteer firefighter saves a life hanging on the edge

By the time the Baergens arrived to the scene, the flames were already roaring out of one side of the vehicle.

Only a few feet further off the road, and the driver that Daniel Baergen rescued Sunday would have slipped off the cliffside toward the waters below.

By the time firefighters had put out the flames, the injured driver’s overturned vehicle was a mess of blackened steel.

GRANT COUNTY - When Daniel Baergen, a volunteer firefighter of over 20 years with Grant County Fire District No. 6, left church Sunday morning with his wife, Dawn Baergen, they had hoped to make a quick trip to the grocery store and get back home in time for the Seahawks game.

Only hours after Gov. Jay Inslee announced that restaurants would have to close indoor dining by Wednesday, the pair decided to go out to eat one last time, grabbing lunch in Ephrata and ordering their groceries online while they waited. They expected to pick up their groceries and quickly leave, but the store was chaos, as panic buying swept the state. It took well over an hour before they were able to leave town and start heading back home in Coulee City.

At the time, it was a frustrating delay. By the end of the day, the Baergen’s were convinced it was an act of God.

Driving back home on state Route 17, the Baergens were passing by Lake Lenore near Soap Lake when they saw a man on the side of the road waving them down. Slowing the vehicle, Daniel saw smoke drifting into the air just past the man.

When Daniel pulled over and rushed toward the smoke, he saw an overturned car just feet from a cliffside overhanging the lake, fire licking out of the hood, and the driver still trapped inside. The driver’s dog, a little cut up from when it squeezed itself out of a narrow opening in the door, stood nearby.

At that particular location, located roughly in the middle of two Fire District No. 7 fire stations, Daniel knew that it was going to take time for an ambulance or on-duty firefighters to arrive. The driver, still conscious, was struggling and failing to push open the door.

Daniel got to work.

Only a day before, Daniel had been training with other members of the fire district on proper usage of the Jaws of Life and how to safely extricate someone from a disabled vehicle. Of course, Daniel didn’t carry the specialized hydraulic steel tool in his personal car, so he began banging at the driver side window with a metal coffee cup that appeared to have fallen from the boat that the car was hauling before it careened off the road.

On Saturday, the trainer from a Clark County fire district had taught Daniel that the glass in newer vehicles was much harder to break. Indeed, despite his best efforts, the coffee mug was proving useless. Dawn, still on the phone with 911, saw this, and ran over to hand Daniel a sharp stone.

Equipped with a better tool, Daniel smashed out the window and cleared the glass from the edges. With Daniel’s help, the driver was able to slide himself halfway out of the car, before, exhausted, he needed to be half-carried the rest of the way out. The man that had waved down Daniel assisted, and they walked the injured driver up to the side of the road.

By the time the fire department got there, the car was fully engulfed.

“There’s a lot of things that could have been a little different,” Daniel said in an interview. “If the vehicle had gone another 15 feet it would have gone into the lake. By the time the fire department got there, it was pretty much fully engulfed. If no one had gone and checked there — it was a God thing.”

While he doesn’t like being in the spotlight, Daniel said he hopes his story encourages other people to volunteer for their local fire department or district, many of which rely almost entirely on volunteers.

“If we can get more people to volunteer for the fire department and do training, then it’s worth it,” Daniel said. “You can go to your local fire district and be a part of helping other people out.”

By the time firefighters had put out the flames, the injured driver’s overturned vehicle was a mess of blackened steel. 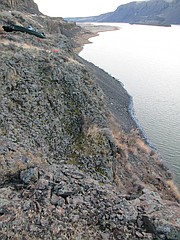 Only a few feet further off the road, and the driver that Daniel Baergen rescued Sunday would have slipped off the cliffside toward the waters below.

By the time the Baergens arrived to the scene, the flames were already roaring out of one side of the vehicle.