(From left to right) Sarah Schaapman, Carolyn Harris, Brianna Rang Motzkus and Cindi Rang at the Fabric Patch in Ephrata. Cindi Rang, a former nurse practicioner, has started an effort to assist with limited protective masks in the community.
Casey McCarthy/Columbia Basin Herald

A collection of face masks, compiled to be distributed at the Fabric Patch in Ephrata.
Courtesy photo

Melinda Farmer of Ephrata donated these cotton face masks, covered in cartoon nurses, toward The Fabric Patch’s efforts to assist in shortages around the community.
Casey McCarthy/Columbia Basin Herald

A collection of recently gathered donated masks sit in the front of the Fabric Patch store in Ephrata as Cindi Rang and her employees work to assist with shortages around the community.
Casey McCarthy/Columbia Basin Herald

EPHRATA — A former nurse practitioner in the area for 20 years, Cindi Rang watched the news last week as hospitals and emergency responders around the country worked to deal with the shortage of N95 respirator masks and other facial protection.

A particular story from a hospital administrator in Atlanta stood out to Rang. It was about hospital staff cutting up surgical sheeting to make covers to try to extend the use of the hospital’s remaining N95s,

“N95s, if you’ve ever worn one before, they’re hot,” Rang said. “You can wear one for about an hour, and you’re uncomfortable the whole time. To wear one all day is incredibly uncomfortable. And then to put a cover over the vent that has air, that is going to make it unbearable.”

Rang said she then began to think about where facilities and health care providers would go next, with facial protection already in short supply.

“I knew that very soon, nobody was going to have anything,” Rang said. “I know that the school district had to give their whole supply of N95s to the hospital. EMTs, fire departments, if everybody is giving to them all away, and we’re still running out, then no one has anything.”

Rang said she started tossing ideas around with her daughter and a few other people as to how she might help. Two things she knows in this world, Rang said, are health care and fabric.

Rang is a co-owner of The Fabric Patch, a quilt and fabric store in Ephrata. She launched a campaign last week through her store, with the help of quilters in the community, to sew protective masks for people “on the front line” of COVID-19 prevention and care.

“I wanted to get them for the nursing home residents, the nursing home staff, the home health staff, the people passing out meals to the kids, all of those people that really need better protection and can take them home and wash them,” Rang said. “Sure enough, by Friday, I was getting calls.”

One of the first places The Fabric Patch store owner sent masks to was the nursing home in Soap Lake, which had only five masks left. Rang said ensuring nursing homes had a sufficient supply became a top priority.

“We gave them 56 masks because we knew if it gets in a nursing home, the same thing that happened in Kirkland is going to happen here,” Rang said.

The fabric store owner said she started trying out different materials and combinations last week to craft an effective, wearable mask for anyone who may need it. Rang found a material that, when double-layered, she felt acted in place of the surgical sheeting, then paired it with a cotton cover.

Videos detailing materials one might need as well as instructions on sewing the masks were all posted to The Fabric Patch’s Facebook page, in addition to messages from Rang reiterating the importance of their cause.

As a former medical professional, with friends and family members still in the field, Rang said she was concerned for all of them, knowing their commitment to the profession.

“Just like a firefighter runs into a burning building, a nurse is always going to stop afterwards and think, shoot, I should have put on gloves or I shouldn’t have breathed in that air,” Rang said. “You don’t even think about that, you think first about the patient.”

It didn’t take long after starting the endeavor for calls to come pouring in, Rang said. Calls from communities and health facility employees around the state, and country, asking for masks. The fabric store owner said they originally planned to simply fill orders as they arrived. Soon, though, Rang and her fellow quilters knew they would need to divide and conquer.

Rang said she knows quilters just about everywhere and began reaching out to them. Quilters such as Debbie Snyder and Connie Frey in Moses Lake have taken charge in their area, corralling quilters, gathering masks and distributing them.

“We have somebody in Grand Coulee, somebody in Ellensburg, in Pasco, in Kennewick,” Rang said. “Those people are calling their friends and their guild members, and collecting the masks and distributing them.”

The approach is similar to the instructions for putting on an oxygen mask on an airplane, Rang said, taking care of your own first before helping those around you. While they are close to their mark in Ephrata, she feels they don’t have even 20 percent of what they need in all.

“As soon as we feel like we’re good here, then we’re going to move to the next community over,” Rang said. “The need in Wenatchee is massive, Tri-Cities is massive. So we’re just going to keep making them.”

Rang said they had collected, or made, more than 900 masks as of Wednesday, March 25. They are not selling the mask kits or materials, only giving them away right now for completed masks in return.

After contributing nearly $20,000 in supplies, Rang said, a GoFundMe page was launched for materials.

Quilters are a tight-knit community, Rang said, which has been a large factor in making the project possible.

“The quilters tend to be altruistic anyway; we make quilts for other people,” Rang said. “People seldom come in and say they’re making a quilt for their bed. It’s for their neighbor, it’s for a baby. This, making masks for the community, it’s right up their alley.”

Ruth Watson is a resident at Garden Oasis Assisted Living in Ephrata and one of the many quilters contributing their skills. Due to restrictions put in place, Watson is unable to receive any visitors right now, or make her trip down to the local quilt shop for materials to make her baby quilts, which she donates.

“Now Ruth is sewing masks instead of baby quilts, and she’s up there in the lion’s den,” Rang said. “We worry about her, but we can’t go visit her, of course. She’s just a pleasant person and good-spirited.”

Having an army of people ready, able and willing to help sew is nice, Rang said, and said she’d love to continue to add to her team. The main problem remains, not everyone knows how to sew.

“That’s why we did this very involved video on why we’re asking them to do it this way, so people don’t take shortcuts, and then how to actually construct it,” Rang said.

Throughout this effort, the Fabric Patch shop owner said she’s keeping track of everything they’ve spent, with plans to donate any money left over toward the Soap Lake Police Department’s effort to add a new canine. 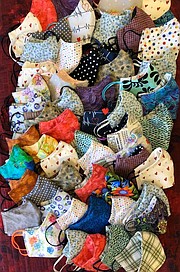 A collection of face masks, compiled to be distributed at the Fabric Patch in Ephrata.

Melinda Farmer of Ephrata donated these cotton face masks, covered in cartoon nurses, toward The Fabric Patch’s efforts to assist in shortages around the community.

A collection of recently gathered donated masks sit in the front of the Fabric Patch store in Ephrata as Cindi Rang and her employees work to assist with shortages around the community.