Julianne Klein and her foster dog, Ringo. Klein became a foster after she found a stray and helped get it back to its family.
Cheryl Schweizer/Columbia Basin Herald

Stella (pictured) got to go home to her family, thanks to Julianne Klein.
Courtesy photo

Stella takes her ease in the living room at Julianne Klein’s home. Klein found a way to get Stella back to her family.
Courtesy photo

Stella (left) takes a nap in the living room of Julianne Klein’s home. Klein found a way to get Stella back to her forever family.
Courtesy photo

Julianne Klein and her foster dog Ringo. Klein became a foster for dogs after finding a stray dog she helped return to the dog’s family.
Cheryl Schweizer/Columbia Basin Herald

MOSES LAKE — Julianne Klein said she first saw the dog in the parking lot at Papa’s Casino one day in early February.

“I saw her from the other side of the fence,” Klein said. “My husband actually pointed her out. So I made him pull over, and got out.”

Klein has a special affinity for animals in general, and dogs in particular. “I’ve always been a huge animal lover, but dogs I just connect with differently.”

The dog was suspicious of humans, even when Klein tried to feed her some leftover snacks. “She wouldn’t come anywhere near me, and was scared of me.” But she ate the food when she thought Klein wasn’t looking.

“She looked terrified of humans, and she had these scratches all over her face. I was thinking she had been dumped there, and left to fend for herself,” Klein said.

She posted a picture of the dog on social media, but no one responded, at least not any possible owners. She was contacted by Bonnie Helvey of the Animal Rescue Friends Society (ARFS) of Grant County, who was willing to help her catch the stray dog.

The two tried the next day, Klein said, using a trap and dog treats. But they didn’t catch her, even though they tried for more than four hours. “I think we just fed her too much, and she kind of lost interest.”

Klein went looking again the next morning, and later that day when she picked up some lunch. “I was driving back and I saw her, running along Stratford,” she said. The dog knew her by then and approached – but not too close.

So Klein decided to have lunch with the dog. She parked her car and started eating, paying no attention to the dog. “She would come up and she just kind of sat there and ate lunch with me,” she said. “I didn’t touch her or anything, just shared my lunch.”

The spot was not far from Klein’s house. “I wondered if I could just – lure her home. So I just left my car there and walked. And she followed me all the way home,” she said. She had the help of a package of dog treats.

The dog was still too skittish to actually come too close, so Klein started cleaning out an empty dog kennel. She left some food in the kennel, and when the dog went after it, she closed the door.

It took a lot of patience, but the dog was, in Klein’s opinion, worth it. “She was so sweet.”

Once in the kennel the dog and Klein formed a bond. The next morning Klein went into the kennel and sat beside the dog. “She just hopped in my lap, and we became best friends,” she said.

She gave the dog a name, Stella, and started searching for Stella’s owners – although, given Stella’s injuries, she wasn’t sure she wanted to find them. “I was just going to keep her myself, because I had fallen in love with her,” Klein said.

But her efforts to find the owners did pay off. She got a message from a woman who claimed to be Stella’s owner. “She was sending me pictures and I could see it was the same dog,” she said.

Stella had disappeared a few days after Christmas. Klein said she now thinks Stella was stolen from her owners’ yard by someone who kept her for a few weeks and decided to dump her.

“I’m just happy, because once I got to know her, it broke my heart to think that nobody loved her,” Klein said. But Stella did have a family who loved her.

Klein took Stella home, and the dog was suspicious at first. But once Stella recognized her owners, “she just jumped in their arms,” Klein said. “She was so happy to be home.”

The experience with Stella led to a new venture for Klein – she became part of the foster network for the ARFS organization. Ringo is her first official foster dog. “The first night was – rough. He was really anxious.” Once he was in the house “I had to lay on the floor next to him,” she said. But after the first night he lost that anxiety. She will keep him until he finds a family.

Ringo is the first, but he won’t be the last. “I want to keep doing it,” she said. 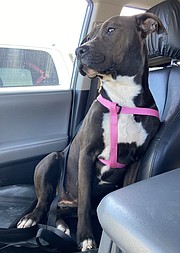 Stella (pictured) got to go home to her family, thanks to Julianne Klein. 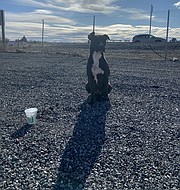 Juilanne Klein said Stella (pictured) wouldn’t let her get close, at least not at first.

Stella takes her ease in the living room at Julianne Klein’s home. Klein found a way to get Stella back to her family.

Stella (left) takes a nap in the living room of Julianne Klein’s home. Klein found a way to get Stella back to her forever family.

Julianne Klein and her foster dog Ringo. Klein became a foster for dogs after finding a stray dog she helped return to the dog’s family.