PFA Entertainment/courtesy photo Keith Urban will be one of the headliners at this year’s Watershed Festival July 31-Aug. 2.

Last year’s Watershed Festival drew thousands of country music fans to the Gorge Amphitheatre. Tickets go on sale Feb. 21 for this year’s festival, which will be July 31-Aug. 2.
File photo

Keith Urban will be one of the headliners at this year’s Watershed Festival July 31-Aug. 2.
PFA Entertainment/courtesy photo

GEORGE — Tickets go on sale Feb. 21 for the three-day Watershed country music concert, scheduled for July 31 through Aug. 2 at the Gorge Amphitheatre. Traditionally, the concert draws major country music performers, and Keith Urban, Dierks Bentley and Thomas Rhett are among the headliners for 2020.

The 2020 concert will be the ninth year for Watershed. Along with the music, the concert is a popular camping venue, with self-proclaimed “Shedders” returning each year to go camping and listen to the music.

Urban, who was raised in Australia, has been a country music star for more than 20 years, appearing on the music scene in the mid-1990s. He has released eight albums in the U.S. and had 37 singles make the charts, including 18 songs that hit No. 1.

Rhett is a songwriter as well as a performer. He has written, or co-written, songs for other country performers, including Jason Aldean and Florida Georgia Line. He has released four albums as a solo performer, with 14 of his songs reaching No. 1.

Ballerini, like Bentley, saw her first single reach No. 1 – and the next two songs also reached No. 1. Her first album was released in 2015, with a second in 2017. A third album is scheduled for release in March. Evans is a native of Australia who released his first album in 2017, and he is Ballerini’s husband.

Currington’s first album was released in 2003, and he has produced five additional albums. He has 11 No. 1 singles.

Pardi’s musical style pays homage to the roots of country music. He’s also a songwriter and producer, and has released three albums.

Brown is one of the stars of the emerging genre of country rap.

Houser too was a songwriter before his career as a performer, writing songs for Justin Moore and Trace Adkins among others. He has released five albums.

Along with the longtime acts, the main stage schedule includes artists who started gaining attention within the last two or three years.

Dickerson released his first album in 2017, which produced two No. 1 singles. He’s working on a second album, release date to be announced. Denning is a songwriter as well as a singer, writing songs for Aldean, Justin Moore and Chase Rice. His first single as a solo performer was released in 2018. Between sets he’ll be spinning tunes as Dee Jay Silver.

Caillat has a solo career in pop music in addition to being part of the two-man, two-woman quartet Gone West. The band released its first single in 2019.

Ell is a Canadian singer who has released two albums, with her first debuting at No. 1 on the album chart. Michael Hardy performs under his last name; he’s a songwriter as well as a singer, and has released singles and two online collections of multiple songs.

McBryde has released three albums, two independently, and has been nominated for a Grammy Award. A fourth album is scheduled for release in April. Tenille Arts also is a Canadian singer as well as a songwriter, and has released two albums, including one in January.

Last year’s Watershed Festival drew thousands of country music fans to the Gorge Amphitheatre. Tickets go on sale Feb. 21 for this year’s festival, which will be July 31-Aug. 2. 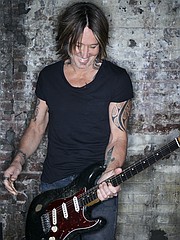 Keith Urban will be one of the headliners at this year’s Watershed Festival July 31-Aug. 2.

Country sensation Kelsea Ballerini will take the stage at this year’s Watershed Festival.