Emry Dinman/Columbia Basin Herald | After 26 years, Thai Cuisine is closing, taking with it the dishes customers have come to love, like the signature Thai omelet, shrimp Pad Thai, various curries an

When Piturachsatit and her 67-year-old husband, Somchai, emigrated to the United States from Thailand in the early 1980s, they were looking for a quiet place, preferably on the water, to start their business.

“We drove around,” Jamsri said. “We liked the name of it. I grew up on the ocean; we were looking for water, for a little town. We didn’t want to live in a city.”

She had lived in the Thai capital of Bangkok, back in the 1970s, when big-city life was fun, she said.

“You could take the bus and go everywhere. But when you live in a big town for a long time, you feel your age,” she said.

And fortunate it was for Moses Lake that they settled here. Because that business, known simply as Thai Cuisine and located right next to Ace Hardware in the Grant County Mall (where the Safeway is, on South Pioneer Way), has flourished for the past 26 years, serving up heaping dishes of Pad Thai, steaming bowls of Panang beef, and skewers of satay chicken.

Sadly, like all good things, it is coming to an end. The Piturachsatits will close their restaurant at the end of March.

Time to retire, Jamsri said, to enjoy some extended time with their grandchildren on the West Side. To travel, see some of the country, just get in the car and go somewhere.

Little has changed since they opened in 1993, except the prices, Jamsri said. If there are any secrets to their success, to their longevity, Jamsri focuses on two things — serving good food and getting to know customers well and treating them like family.

While Somchai, who does most of the cooking, does some prep work in the morning — mostly cutting vegetables and meat for use that day — Jamsri said they make each dish as it is ordered.

“I teach him well,” Jamsri added.

“We make from scratch, and it’s made to order. If we made a big pot, we’d have to throw some away,” she said. “We didn’t eat leftovers growing up (in Thailand). That’s why we do it one order at a time.”

“We just cook what we eat at home,” she explained.

But she also loves having customers come and eat. Especially those who keep coming back. Over the years, Jamsri said she’s gotten to know returning customers well, what they like, and even something about their lives.

“I love what I do, I like to visit with people,” she said. “This is my life, I talk with customers.”

“My goal is to make people happy, and I feel sad when someone criticizes my food,” Jamsri said.

The same goes for many of her employees. Jamsri said she tends to hire people she knows, or has people who work for her recommend their friends.

“I’ve worked here on and off since I was 16,” said Madison Jennings, a waitress at Thai Cuisine.

Describing herself as “almost 30,” Jennings said she has known the Piturachsatits since she was 4 years old. She has worked on and off at Thai Cuisine while she pursued a bachelor’s degree in psychology from Central Washington University, and she intends to start a master’s program in counseling this fall.

“It’s been a lot of fun. I’ve grown to love working here,” she said. “I really love the food; it’s easy to sell, and they’ve taken good care of me.”

“I knew this was coming,” Jennings added as customers begin to sit at tables. “I have a lot of love for this place. I will miss working here for sure.”

“I feel bad, I have stomach butterflies all the time,” she said.

Some people have looked at buying the restaurant and continuing it, Jamsri said, but unlike the Piturachsatits, they don’t want to live in a small town.

Which will, for at least a while, leave Moses Lake without as much good, lovingly made, authentic Thai food.

“We’re so lucky, people in this town are so nice and friendly to us,” Jamsri said. “Tell all my customers I appreciate their support. I will continue to live here. I love it here. People care about each other.” 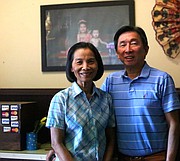 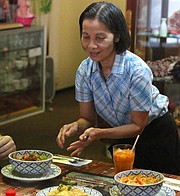