QUINCY — What does it take to fly? Well, for starters, don’t touch the harness.

Fidgeting with the harness makes the illusion of flying harder to sustain. That was the instruction from Mark Kostuch, flying director for the Quincy Valley Allied Arts production of “Mary Poppins,” to Taylor Street, who plays Mary’s friend Bert. And the goal in the QVAA production is to make flying look effortless.

Mary Poppins, of course, is the magical nanny who comes into the lives of the Banks family in Edwardian London. The musical is based on the books by P.L. Travers and the 1964 Disney movie. It premiered in 2004 in Great Britain and 2006 on Broadway.

“The feel of the show is very similar to the movie,” said Stephanie Moore, who plays Mary Poppins. “Similar, but still different.”

One thing is common to all versions, and that is Mary Poppins in flight. Director Tom Parrish said the equipment at the new QHS theater gives the company the opportunity to play “Mary Poppins” as it was written, something that wasn’t possible at the previous theater.

But realizing the new theater’s potential is a cooperative effort. Kostuch said flying is a three-person job – five people, really. “It definitely takes teamwork between the director, the flying director, the operators and the performer,” he said.

Two people work the flying mechanism. The lift operator is in charge of getting the performer in the air. The travel operator moves the actor across the stage. The actor’s job is to maintain balance – and Mary is carrying an umbrella and suitcase part of the time.

“It’s like a dance between three people,” Kostuch said.

Bert also goes flying, and in his case he’s walking into the air in an invisible tube.

“If anything it’s a little harder on Bert,” Kostuch said.

And everything has to work perfectly. “You have three people doing one effect,” Kostuch said. “So if something is off, it’s very noticeable.”

Kostuch was in Quincy on Monday and Tuesday to train the crew and work out, under Parrish’s direction, all the stage cues. Originally, Mary entered from the left, but it turned out to work better if she flew in from the right.

Bert not only walks into the air, he turns flips. “Stomach muscles and stamina,” Kostuch said.

The flying mechanism itself is a series of wires attached to a harness. “It’s not as comfortable as it looks,” Moore said.

When she’s actually in the air, it turns out there’s not quite enough padding.

Mary’s umbrella and bag add an extra variable to the balance equation. “My arms are definitely sore today,” she said.

Moore is a rock climber. “I’ve been higher than that in a harness,” she said. But when climbing rocks she’s in control – and it’s not that way on the stage. The process requires trust, she said. “A lot of trust.” 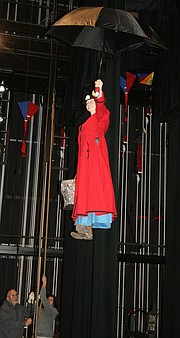 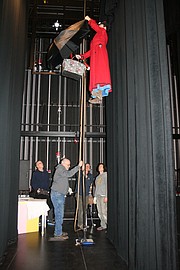 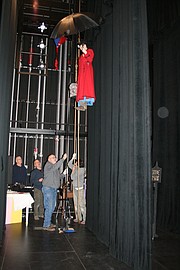 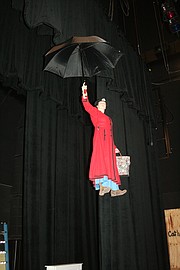 Mary Poppins (Stephanie Moore) arrives to take up her job at the Banks house, and save the Banks family. The Quincy Valley Allied Arts production opens Feb. 20.